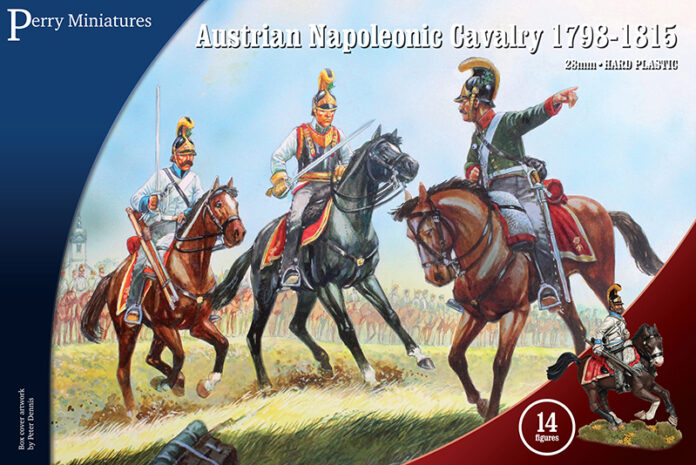 NAPOLEONIC AUSTRIAN HUSSARS: 1805-15 28mm Figures Set contains 14 cavalrymen, painting guide and bases. All the 28mm figures in this set can be assembled in full or campaign dress, and either at full charge, sword shouldered, or attacking. The Austrian Hussars were the most colourful troops in the Austrian army, all coming from the Hungarian part of the Austrian empire. They were used for all duties; scouting, skirmishing, and in battle. $32.00

D-DAY TO BERLIN: Wargame Rules for Corps Level Battles In WWII Abstract treatment of corps-level actions on the Western Front 1944-1945. Players are Division and corps commanders, with each commanding one or more Divisions. Each player maneuvers his units and attacks the enemy player, hoping to destroy as many enemy units as possible and gain objectives while minimizing his losses while denying the enemy his objectives. DDtB is a fast playing game that can be concluded in a reasonable amount of time. An average game is usually over in 2-3 hours. $24.00

UNIFORMS OF FRENCH RESTORATION 1814-1830: Volume 1 Illustrations from Histoire del la Maison Militaire du Roi de 1814 a 1830. A great work realized in 1890 by Eugene Titeux. The work is in two volumes with a total of 84 color plates. Our edition is based almost entirely on the Viskuezzen collection, which belongs to the NYPL, to whom we are particularly grateful. We left all the captions of the plates in the original French text. All the plates have been extensively restored and, in some parts, reconstructed, since the originals preserved at the NYPL are mostly not in good condition, often assembled in rough cut-outs etc.

UNIFORMS OF FRENCH RESTORATION 1814-1830: Volume 2Half the book is dedicated to about 40 illustrations by Eugene Lami and the other half by Joseph Louis Hippolyte Bellange, Henri-Louis Dupray, Jean-Baptiste Genty, Roger Croux, and others. $39.00

IN THE MIDST OF THE KINGDOM: The Royalist War Effort in the North Midlands, 1642-1646   Reassess the nature of the royalist cause in the North midland counties of Derbyshire, Leicestershire, Nottinghamshire, Rutland, and Staffordshire during the first civil war (1642-1646).  Examination of a wider range of information showed that by contrast the royalists had a regional command structure which exploited thoroughly at times the resources of the region to fund their war effort. However, there were several problems within that war effort. Command was subject to internal rivalries and the interference of the king. Moreover the higher levels of command in the royalist cause created problems for the royalist commander Lord Loughborough, as his region was divided between different commanders at several points in the war. $50.00

VILLERS-BOCAGE 1944: Tiger vs Firefly & Cromwell On the 13th of June of 1944, in less than an hour, at least 12 tanks, 14 armored vehicles, two guns, and a scout carrier were destroyed by a single tank. This is the striking feat of Michael Wittmann, the most famous panzer commander of the Second World War. Includes eight 3D maps and five graphic plates. $39.00

THE LEGNANO COMBAT GROUP Legnano Infantry Division is considered the first nucleus of the co-belligerent Italian Army. As part of the First Motorized Group, it made its combat debut at Montelungo on 8 December, 1943. Five months later, this small formation was expanded, becoming the Italian Liberation Corps. Beginning in September 1944, six Italian Combat Groups, equipped with Allied weapons and materiel, were established. The Legnano Combat Group, heir of the Legnano Division, was given the responsibility of the Idice Valley sector on 23 March 1945. Commanded by General Umberto Utili, the Group participated to the liberation of Bologna and was also involved in other fights before the end of the war in Italy, the last of which took place in Val Sabbia on 2 May 1945.  $25.00

THE LANDSCHUTZ OF THE ADRIATIC COAST (OZAK) After the Armistice and the consequent German occupation of the Julian regions, which were in fact annexed to the German Reich with the creation of the Zone of Operations of the Adriatic Coast, the German military authorities decreed the establishment of territorial self-defense units, formed by Italian, Slovenian, and Croatian citizens, to flank the German units in the fight against the partisan phenomenon.  $25.00

THE ARMORED UNITS OF THE ROYAL ARMY AND THE ARMISTICE The Armistice of 8 September 1943 caught the Italian armored units scattered not only on the national territory, but also abroad. Like all Italian units, reaction to the armistice was varied. The units that opposed the German attacks, although in need of armaments, fought for reasons of desperation, in a war that was now lost, and for a touch of military pride. This first volume deals with Italian tank and Armored Cavalry units’ reactions and the attempts to defend the city of Rome.  $25.00

AND DON’T FORGET THE MAGAZINES

Visit www.onmilitarymatters.com for all stocked items. If in doubt about an item or you wish to order, e-mail militarymatters@att.net or phone 609-466-2329. Thank you for your continued support.