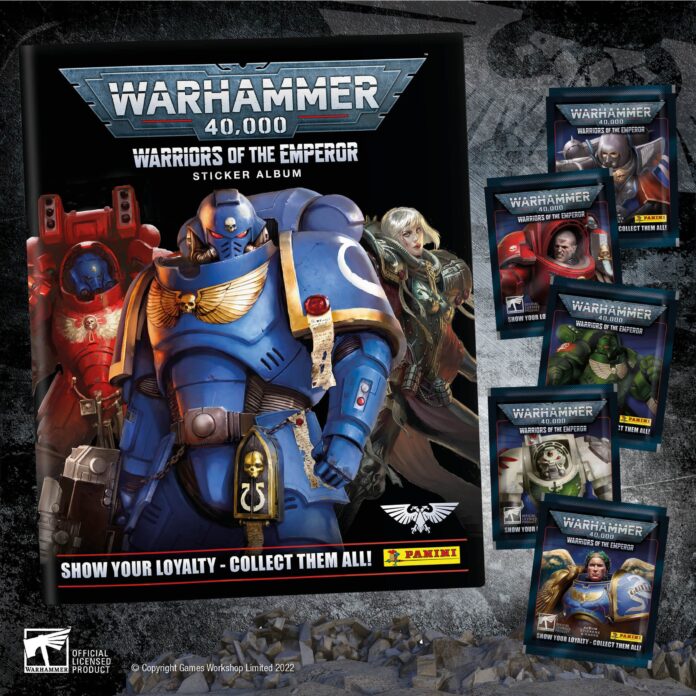 Panini UK Ltd today announced a new partnership with Games Workshop to create a range of Warhammer collectables, with 2022 launches for both stickers and trading cards. It’s time to fight for the future of humanity across a vicious, war-torn galaxy! Prepare for battle with Panini’s first new launch, Warhammer 40,000: Warriors of the Emperor Sticker Collection.

A mighty collection of 204 stickers and 50 Hero Cards, with a buildable box and a double-sided pull-out Space Marines Armoury poster which allows collectors to delve deeper into the 41st Millennium where, driven by war and assaulted by the foul forces of Chaos… Xenos, Daemon and Traitors emerge from the darkness to prey upon the Imperium. The armies of the Emperor rise up to grind these vile enemies to dust with their armoured boots. Inside the sticker album, collectors can honour the Ultramarines, the Dark Angels, the Space Wolves, the Blood Angels and the Sisters of Battle – the supreme and devoted warriors who live each day in endless warfare. All who know Warhammer know… in the grim darkness of the future, there is only war… and this is the sticker collection to bring that war to life!

“We are excited to bring Warhammer stickers and trading cards to the marketplace. Warhammer and Panini have great synergy, as consumers actively engaged in the Warhammer setting and Panini’s core collectors are of a similar profile. We are privileged to be given the opportunity to work on such a popular IP with a dedicated fan base  and look forward to working with the team at Games Workshop to create a wide range of products that consumers will love.”

The sticker collection is launching in the UK in spring 2022, with the launch of the trading cards scheduled for autumn 2022 followed by roll-out in other key territories later in the year. The UK launch will be backed by a multi-faceted marketing campaign including heavy investment in digital, album sampling, and coverage across the Warhammer Community digital and social channels.  Panini UK have secured broad distribution across key grocers, convenience, toy, e-commerce and newstrade retailers with in store point of sale to support the launch, as well as a number of floor display units placed in select retailers.