Fists of the Ruby Phoenix Player’s Guide Available from Paizo 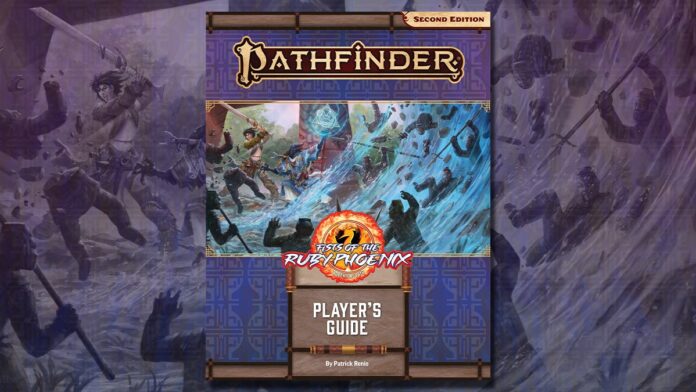 Paizo has made available for free a pdf of Fists of the Ruby Phoenix Player’s Guide. Or you can order a hard copy.

The powerful sorcerer Hao Jin has returned to the Material Plane to preside as grand judge over her world-famous fighting competition, the Ruby Phoenix Tournament. Contenders from around Golarion flock to the tournament to compete for a prize from Hao Jin’s legendary treasure vault. Does your team have what it takes to become this year’s Ruby Phoenix Champions?

Inside the Fists of the Ruby Phoenix Player’s Guide, you’ll discover spoiler-free details on:

The Ruby Phoenix Tournament, including a brief history of the Hao Jin Tapestry and how the tournament has changed since Hao Jin’s return to the Material Plane.

Adventuring in the Dragon Empires, including descriptions of the archipelago nation of Minata and Goka, the City of Wonders.

Your Player Character, including suggestions for creating new characters or using existing characters, plus new character backgrounds specifically for this Adventure Path such as Attention Addict, Newcomer in Need, and Second Chance Champion.

Forming a Fighting Team, including inspiring tables to help you randomly or deliberately choose your team’s theme, motivations, strengths and weaknesses, quirks, and more.

A full-page map of Tian Xia, including nations, borders, and terrain.

Tournament Rules, including a handy summary of the rules for the pre-qualifier event and for the Ruby Phoenix Tournament itself.