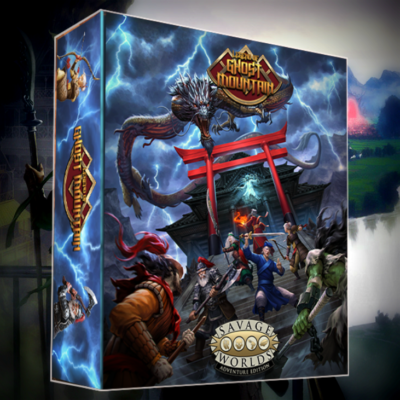 We are exactly ONE WEEK away from the launch of the new Legend of Ghost Mountain Boxed Set for Savage Worlds on Kickstarter!

In the Legend of Ghost Mountain, players take on the role of Ghost Wardens facing a dire threat to the world of the living. Ghost Wardens draw magical power from strong emotions: Rage, Fear, Joy, Disgust, and Sorrow. Throughout their adventures, the heroes must face breath-sucking ghosts, hungry corpses, and deadly denizens of Hell. And that’s just the restless dead. There are plenty of the living who want nothing more than the destruction of Ghost Mountain and its guardians as well!

The Legend of Ghost Mountain Boxed Set requires Savage Worlds to play, but contains everything else needed to bring the action and adventure to the table ready to play:

Visit the Legend of Ghost Mountain Kickstarter pre-launch page right now to add your email address so you can be alerted the moment the campaign goes live next Tuesday, January 17th (which also happens to be COO Jodi Black’s 50th birthday!)

For more info and some exclusive, pre-launch sneak peeks, listen for the dragon’s roar and join us next Monday, January 16th at 8pm Eastern on our official Twitch channel.