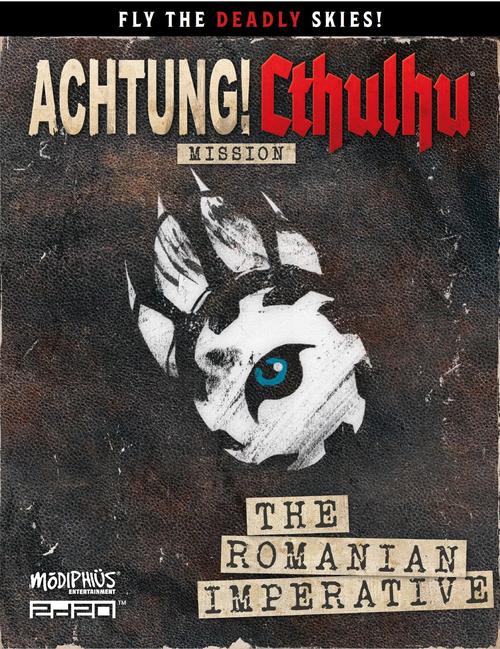 Today we’re delighted to announce the release of The Romanian Imperative, a brand new mission for Achtung Cthulhu 2d20.

The Romanian Imperative is available on Modiphius.net and Modiphius.us and also on DriveThruRPG.com. Game designer and writer Patrick McNally has written a brand new blog on the design of this cracking adventure and will be hanging out in the Modiphius forums today to answer any questions you may have!

Also don’t forget to sign up for the Achtung! Cthulhu Facebook Fan group, which has just passed 1000 members and where we’re giving away a Black Sun Exarch’s Edition and other prizes to celebrate!

It is February 1941 and after the fall of Tobruk in January, Churchill boldly tells the US: “Give us the tools, and we will finish the job.”
Meanwhile, in Romania, a rather unusual occurrence attracts the attention of Section M. In the remote mountains near the village of Zaltan, a prototype Zeppelin named the Huginn has appeared, hovering over the ruins of an ancient castle. The tell tale blue glow of its engines and wolf’s paw insignia, a sure fire indication of the presence of Nachtwölfe.
Rogue Nachtwölfe engineer Johannes Vester has been convinced that a centuries-old legend about a Baron who discovered magical sapphires in the mine beneath the castle a motherload of prized Blauer Kristall awaits, ample fuel to power his nightmare experiments.
Section M quickly dispatches a team to reach these remote mountains to investigate. But things are rarely as simple as they seem in the Secret War and the agents must observe, gain information, overcome foes both mortal and uncanny and ultimately thwart Nachtwölfe’s plans by eliminating the threat of the Huginn by any means necessary.
Just another standard day at the office then…