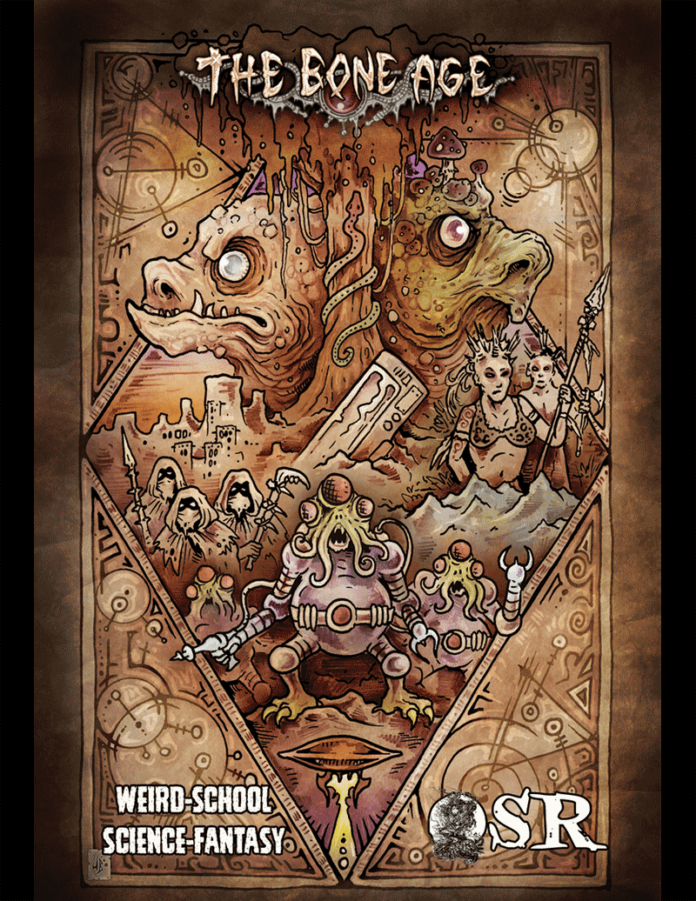 The Ape-Turtles didn’t plan on three flying saucers crashing into the planet.

The Bone Age is an old-school RPG of neolithic-era tribes struggling against the sudden arrival of bug-eyed aliens. You play a Tuzanian, a tribe of jungle-dwelling, vine-swinging, pterodactyl-riding, bone-wielding savages, or a Cruach, giant-crab riding cave-dwellers living in mountains bordering the jungle. Radiation leaked from the Invaders’ crashed flying saucers spreads on winds of purple, blue, and white, mutating the land and its inhabitants. Meanwhile, a race of turtle-apes and ape-turtles sleeping in stasis beneath the surface awoke…1,000,000 years later than planned. And they were not impressed by the native population – or the alien Invaders.

The Bone Age isn’t based on a specific OSR system, but comparisons can be drawn to Swords & Wizardry, Labyrinth Lord, Lamentations of the Flame Princess, and Dungeon Crawl Classics. The base mechanic uses a d20 where higher rolls are better than low rolls, and works in a similar fashion to the way saving throws and attacks work in Labyrinth Lord. Thus, an ability might be expressed as 12+, meaning you want to roll a 12 or higher on a d20. Placing the target number in the hands of the players means they get the thrill of shouting “My attack hits!” or the agony of lamenting “I failed my mutation roll,” as opposed to the Game Master setting a secret Difficulty Class.

The Bone Age uses a class & level system, with levels maxing out at 10. While most of game mechanics in The Bone Age will seem familiar, there are some things that stand out in contrast to many other games. The most important is the concept of Attunement. The land of The Bone Age – called Kalsentia – is itself a living entity, and the creatures that inhabit it can develop a spiritual connection to various geographic regions. These regions are represented by hexes on a map. If you are attuned to a hex, you function more effectively in it. You can attempt to attune to new regions, but you risk the wrath of the land if you offend it – rock slides, earthquakes, and floods are just some of the signs that you have angered Kalsentia.The land is brutally hot. The north is dry, the south is humid. Many regions see rain only once per solar cycle.

Some bullet points of interest: