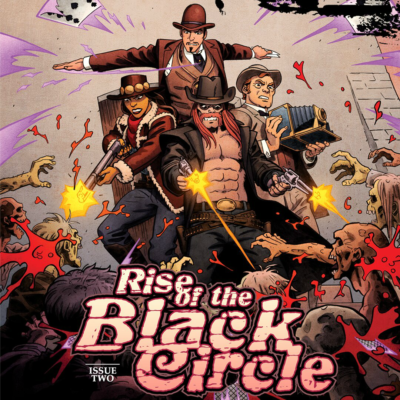 The Kickstarter campaign in support of issues 1 and 2 of Deadlands: Rise of the Black Circle is now live and you do not want to miss this one!

Following the successful campaign for the Deadlands: Dead Man’s Hand Graphic Novel, Outrider Publications is back with a brand new project—the first two issues of a three-issue series written by Deadlands creator Shane Lacy Hensley, with art by Aaron Palsmeier and Simon Gough!

If you backed Dead Man’s Hand you already got issue 1 FREE! (If you didn’t, you can get it free digitally on the launch of this campaign and get collector’s item, limited run print versions of both!)

If you thought issue 1 was action-packed, you ain’t seen nothin’ yet! Issue 2 picks up right where we left off in issue 1, as our heroes must face ever-growing odds against them from the undead and the magic of La Bruja! It’s an all-out battle through the streets of Nacogdoches featuring Bad Luck Betty, Velvet van Helter, Lacy O’Malley, and Ronan Lynch!

And just wait until you meet the GLOM!

So, check your ticket and mosey on over to Kickstarter right now to catch the Deadlands Express!