Death and Taxes for Barons War on Kickstarter 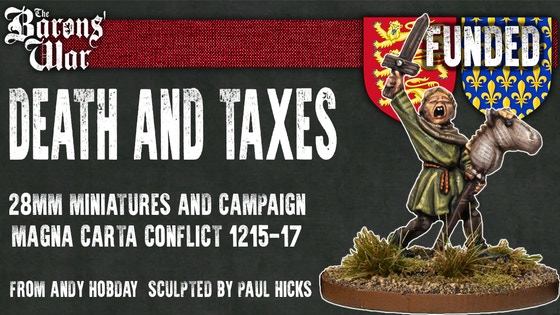 A CAMPAIGN SETTING FOR THE BARONS’ WAR

We are bringing a complete campaign setting to Kickstarter inspired by the playsets of our childhood. It is the first for The Barons’ War and we are hoping that with your backing we can make it happen.

In the village of Wimentun, we find ourselves, a berewick of the King’s manor of Duneham-on-Trent, administered by Philip Mark de la Mare, High Sheriff of Nottinghamshire, Derbyshire and the Royal Forests and his deputy Eustace de Lowdham, the Sheriff’s hatchet man.

Initially appointed by King John, Philip was not a popular man; he and his relatives were judged a “bad lot” with the whole family mentioned explicitly in the Magna Carta. At Runnymede, King John agreed to many clauses, but clause 50 specifically called for his family’s end.

Rebel forces have recently taken control of this area, including Wimentun, and are now asking for taxes to be paid.  The villagers who are supporters of the crown have recently paid taxes to King John, therefore, resisting paying for a second time. Unfortunately for the locals accompanying this request for further taxes has been the threat of their village being burned to the ground if payment is not made.

“You must pay up if you want to enjoy the new King’s peace”, the Sheriff had said.