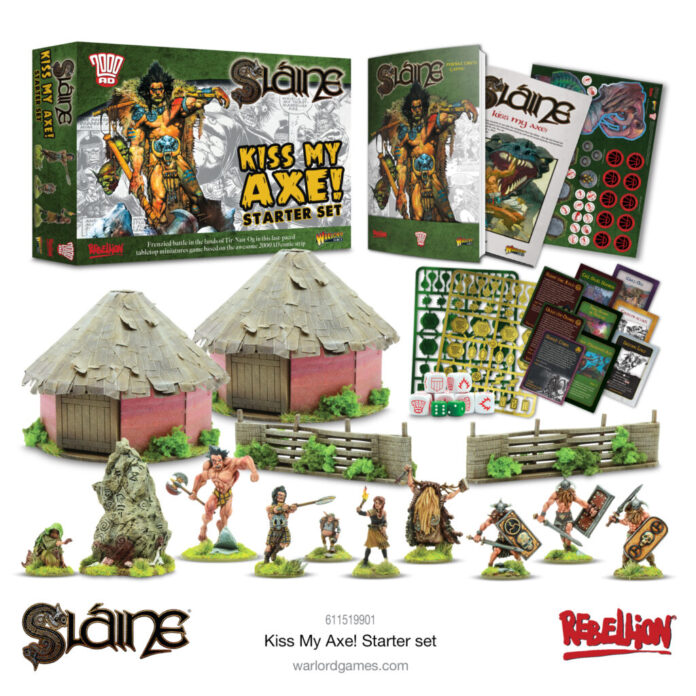 In the Sláine Miniatures Game, the Earth Tribes of the goddess Danu battle the decaying Drune Lords and the relentless Fomorian Sea Demons, over the mist-soaked Land of the Young, in a fast-paced skirmish miniature wargame. Taking control of a small warband of warriors, champions and heroes, players will fight fast-paced battles to determine the fate of humanity in the pre-history of the world. Recruit legendary heroes, such as the titular Sláine Mac Roth, and chart their successes in the Cosmic Battle by performing feats and earning boons.

The Sláine Miniatures Game, penned by Andy Chambers, Roger Gerrish & Gav Thorpe, is the third of Warlord Games’ 2000 AD offerings. Unlike the sci-fi-infused ranged-combat that dominates Strontium Dog and Judge Dredd, Sláine is set in a fantasy world (created and immortalized by the legendary comic creators Pat Mills and Angela Kincaid) and thus is more concerned with the clash of sword & axe and opposing magics. Though aficionados of the previous two games will find a lot of familiarity in the broad mechanics of Sláine, there are a number of key differences that firmly cement it as its own beast.