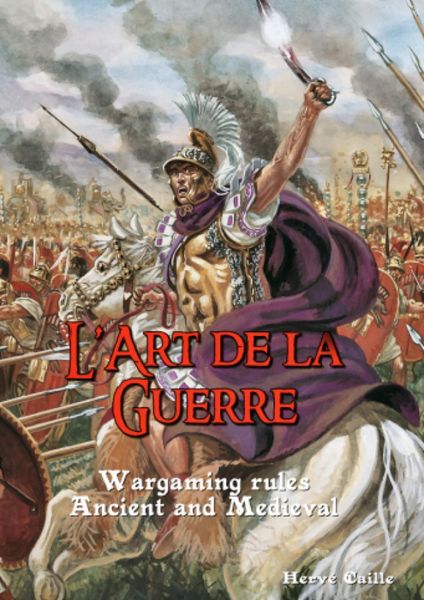 Note that USPS shipping delays seem to be lessening.

L’ART DE LA GUERRE: Wargaming Rules for Ancient& Medieval — 4th edition</b>  4th Edition of French rule set translated into English. It covers antiquity to the late Middle Ages using miniatures from 6mm to 28mm high. The basing is compatible with the majority of existing rules. Contains 300 army lists. L’Art de la Guerre’s flexible system allows players to play standard sized games in a matter of two hours with relatively few figures as well as expansive games with multitudes of miniatures on large tables that can last an evening of play or longer.

An army will generally consist of from twenty to thirty units (one stand = one unit) divided into three corps (right wing, center and left wing), each led by a commander. Each troop type has a basic factor against other troops. Each unit has a number of cohesion points. Heavier troops in close formation start with more cohesion points than lighter ones. The losses from shooting and close combat gradually reduce a unit’s cohesion and when it reaches zero the unit is routed and removed from play.

Combat: Both players roll 1D6 and add their unit’s base factor plus any bonuses. The higher score wins the combat and the losing unit suffers cohesion losses that vary according to the difference between the two results. Troops armed with missile weapons can shoot: archers, cavalry, light troops, etc. A successful shot results in the target losing one cohesion point. Specific rules for charges, impetuous troops, evading, inter penetration, bursting through friends, rallying units, routs, pursuit, and elephant rampage. $50.00

PLAY THE THIRTY YEARS’ WAR: 1618-1648 ECW — Additional Sheets  24 pages full of hundreds of ECW soldiers supplied in the standard scale of 25/28mm that you can, for personal use only, photocopy on thicker cardboard for gaming. Made from the collection of miniatures artist Gianpaolo Bistulfi. Includes instructions to help you assemble the troops. $39.00

GRAND BATAILLE, GRANDE VICTOIRE: European Land Warfare from 1853-1871 This rules set has been written for the wargamers who enjoy a good match. The rules are designed for 15mm miniatures, but has general conversion notes for 5mm and 25mm. Turns equal 15 minutes of real time, with castings representing approx. 60 individual troops. Units are rated with Quality Points (QP) and have a typical number of castings (marked as lost as combat occurs). It has a basic orders system and units fatigue if given too many attack orders in a row. Unit types have a set number of performable functions in a turn for movement, formation changes and other actions. Including eight pages of general troop listings for the major conflicts of the period. There is also a four page discussion of unit organizations and tactics for the armies listed. In Stock. Found a box of them. $12.00

STARGRAVE: Science Fiction Wargames in the Ravaged Galaxy Players take on the role of an independent operators, choosing from a range of backgrounds each with their own strengths, weaknesses, and associated powers. Next, players must hire a crew for their ship, recruiting a lieutenant with a unique skill-set and a handful of soldiers, mechanics, hackers, and other specialists. Some captains may even recruit strange alien lifeforms with abilities no humanoid could ever possess. Once the players’ crews are assembled, they are ready to dive into a campaign. Over a series of games, their crews will have the chance to carry out a variety of missions – recovering lost technology, stealing data, freeing slaves, and fighting back against the pirate fleets. In time, as the crews gain experience, they will become more powerful and hire more talented specialists. The more they grow, however, the more likely it is that a pirate fleet will take note of their activities and come after them!  $35.00

VAE VICTIS # 155 — 1914: Fury in the East (Wargame) Wargame simulating the first five months of WWI in the East between Russian and Austro-German forces from the invasion of East Prussia and Galicia in mid-August to the fighting in Lodz in December, including the battles of Tannenberg, the Masurian lakes, and the Vistula. The units represent army corps or HQs and the simulation emphasizes planning, lethality of combat, and management of reinforcements. Rules in English.  Game Info: Difficulty: 6 / 10; Solo-playability: 7 / 10; One turn: 15 days; Scale: One hexagon = 50 km  $26.00

055 ROMAN LEGIONARY VS GALLIC WARRIOR Combat Men series. Fully illustrated, this study investigates the Roman and Gallic forces pitched into combat in three battles: Bibracte (58 BC), Sabis (57 BC) and Gergovia/Alesia (52 BC).  $22.00

FIGHT FOR A THRONE: The Jacobite ’45 Reconsidered The bid of Bonnie Prince Charlie and his Jacobites for the throne of Britain has never lost its grip on the popular imagination. In July 1745 he and a tiny group of companions arrived in Scotland. They came unannounced and unsupported, and yet within less than five months Charles was able to lead an army to within marching distance of London and make King George II fear for this throne. Afterwards the Highland Army continued to out-fight the redcoats in every encounter, except its very last. These were not the achievements of a backward-looking cause, and this groundbreaking study explains exactly why. Includes 120 color and b/w photos and maps. Hardback version.  $100.00

FIGHT FOR A THRONE: The Jacobite ’45 Reconsidered Softcover version.  $60.00

BOHEMOND OF TARANTO: Crusader and Conqueror  Bohemond of Taranto, Lord of Antioch and unofficial leader of the First Crusade, was a man of boundless ambition and inexhaustible energy — he was, in the words of Romuald of Salerno, ‘always seeking the impossible’. While he failed in his quest to secure the Byzantine throne, he succeeded in founding the most enduring of all the crusader states. Yet few substantial accounts of the life of this remarkable warrior have been written and none have been published in English for over a century.  $33.00

ANCIENT EGYPTIAN WARFARE: Tactics, Weaponry and Ideology of the Pharaohs Concise introduction to Ancient Egyptian warfare from the Neolithic period through to the Iron Age, covering everything from battle tactics to weaponry and battle injuries. The excellent preservation of Egyptian artifacts including bows, axes and chariots, means that it is possible to track the changing nature of Egyptian military technology, as well as the equipment and ideas that were adopted from other civilizations of the Eastern Mediterranean and Near East. Includes discussion of military strategy, martial ideology, construction of fortresses, siege warfare, and the study of practical questions of life, death, and survival of individual soldiers on the battlefield. Includes 30 black and white photos and diagrams.  $15.00

THE GERMAN WAY OF WAR: A Lesson in Tactical Management The central question in this book is why the German Army had a so much higher relative battlefield performance than the opposition. A central element within the Prussian/German Army is Auftragstaktik, a tactical management concept that dates from the middle of the nineteenth century and is still very advanced in terms of management and organization. Using more than 50 examples to illustrate the realities of the battlefield, including North Africa, Arnhem, and the Hurtgen Forest, the author explains why the Prussian/German Army was such an unprecedented powerful fighting force. And why Auftragstaktik – under other guises – is still the basic form of operation for many European armies, with even the US Army introducing certain elements of Auftragstaktik into its organization, more than 150 years after its conception. $43.00

THE UNITED STATES MARINE CORPS IN THE KOREAN WAR: Images of War series

Describes the USMC’ contribution, organization, tactics, fighting doctrine, and weaponry during the Korean War, accompanied by 250 black and white illustrations. $27.00

THE CAMPAIGN OF MAGENTA AND SOLFERINO 1859 Colonel Wylly describes the campaign beginning with Austria’s lethargic opening moves to the rapid series of battles which followed – Montebello, the two-day battle of Palestro, the nearly decisive battle of Magenta, Melegnano, and finally the largest battle fought since Leipsig (1813), at Solferino. The book comes provided with a GIANT sized map (measuring approximately 17 x 34 inches) allowing the reader to track the entire campaign Also included are complete Orders of Battle. Facsimile of original, Out of Print version, found more copies. $20.00

THE SEVEN WEEKS WAR Originally published in 1867 in two volumes, this classic work covers the 1866 Austro-Prussian War in detail. The entire Bohemian campaign, the Western theatre of operations, the Italian front, naval operations—the great battles of Gitschin, Trautenau, Nachod, Skalitz, Langensalza, Koniggratz, Custozza, Lissa and many others are thoroughly investigated. Full descriptions of all the combatants (large and small) and orders of battle are included along with a dozen maps (eight of which fold-out; one is over-sized). Out of Print version, found more copies. $30.00

TACTICAL DEDUCTIONS FROM THE WAR OF 1870-1871   Read about the most feared army in Europe, the victors of Spicheren, Worth, Mars-la-Tour, Gravelotte-St.Privat, Sedan from a Prussian officer who participated in the first ‘modern war’ in history. Learn about the effectiveness of the breechloading rifles – the chassepot and needlegun; Krupp breechloading artillery; an early model machine gun the mitrailleuse; also examine the command and control problems coupled with the tactics and formations used during the Franco-Prussian war. It’s one of the best books ever written on the subject. Out of Print version, found more copies. $30.00

Visit www.onmilitarymatters.com for all stocked items. If in doubt about an item or you wish to order, e-mail militarymatters@att.net or phone 609-466-2329. Thank you for your continued support.

Note that USPS shipping delays seem to be lessening.