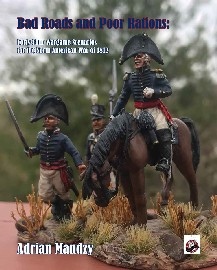 Most items due into the shoppe in a few weeks. Order early to avoid the holiday rush and as a hedge against shipping delays from the publishers/manufacturers to us here at OMM and from us to you.

Bad Roads and Poor Rations: Scenarios for Wargaming the War of 1812. Offers 44 wargame scenarios covering North America in the War of 1812, on land and water. $30.00 USD

British Light Infantry Tactics. Examines the development of British light infantry, from its origins on the Hungarian frontier to the plains of North America. The author examines the lessons learned, forgotten and renewed in the Continental Army. $13.00 USD

Napoleonic French Military Uniforms 1798-1814: As Depicted by Horace and Carle Vernet and Eugene Lami. Three talented French artists, Carle Vernet, Horace Vernet (son of Carle) and Eugene Lami, capitalized on the wave of nostalgia for the First Empire brought on by the death of Napoleon in 1821 by producing a series of prints of French military uniforms of the French revolutionary and imperial armies. These colorful lithographs, each accompanied by a text by an unidentified author describing the unit depicted, were published in book form in 1822 as Collection des Uniformes des Armees Francaises de 1791 a 1814 (Paris: Gide fils, 1822).

The broad range of uniforms depicted includes many from infrequently-illustrated foreign and auxiliary units in the French army. The images also include unusual back and side views of uniforms. The images in this book are contemporary watercolor copies of the prints and are reproduced with permission from the Anne S. K. Brown Military Collection at Brown University. $45.00 USD

Against the Odds #54: Monty’s D-Day Wargame. Monty’s D-Day covers the D-Day invasion of France by British and Commonwealth forces on June 6, 1944. It can be played as a stand-alone game or paired up with the previously published Bradley’s D-Day to cover all of D-Day. Monty’s D-Day was first published in 1985 with limited distribution. Prados completely overhauled the design to 21st Century standards and includes rules for parachute and amphibious landings plus new German alternative responses. It also received a graphics upgrade so as to be visually compatible with BDD. Game: Units are battalion with some company. One turn is two daylight hours or four night time hours. Each hex is 800 meters; Map – One full-color 22 x 34-inch hex mapsheet; Counters – 280 full-color ½-inch die-cut playing pieces; Rules length – 14 pages; Charts and tables – 2 pages; Complexity – Medium; Playing time – Up to 4 hours for the scenarios, 12 to 15 hours for the full campaign game; How challenging is it solitaire? – good. Magazine: Includes articles on the invasion, Hobart’s funnies, Weapons in Normandy, Modeling the Next War, Books Reviews, and more. $40.00 USD

Miniature Wargames: Issue #465 Cover: Rome Rules: A Punic Wars alternative to play with a rules mash up based around GW‘s Lord of the Rings. Stats for the Roman Republic, Carthage, and some commonly used allies and mercenaries. Features: Command Decision: Counterpunch. Following Falaise, this stand-alone game is set in St Lambert-sur-Dives in NW France game in late 1944; Send Three and Fourpence: Tricks and tips to help you be the best referee or umpire possible; French Descent: 18th Centry 40mm game – lays out how to build a best of show game for Partizan; Stone Chapel: Build it; Russian Civil War: Scenario and rule system; The Dead Are Following: Speed paint Lord of the Rings-style Oathmark Undead figures; Let’s Do The Time Warp & New Ground: Editor recaps visits to Salute and SELWG; Reviews: Defence in Depth for Figures and rules, Quartermaster for scenery and accessories plus we have Forward Observer for news and Recce for insightful book reviews; Last Word: Mantic‘s Rob Burman. $10.00 USD

Medieval Warfare: Volume 11.5 with Le Jouvencel. Theme: Le Jouvencel: For the Betterment of the Man of War – Le Jouvencel; And Because I Know the True Story – The Hidden History Behind Le Jouvencel. Features: A Warrior Woman in the 10th Century – The Vikings of Birka; A Knight’s Tale About a Noblewoman’s Truth – The History Behind The Last Duel; The Arms and Armor of Japan’s Elite Warriors – The Samurai; Antwerp Falls to the Spanish Fury – A Citadel Against a City; A Weapon for Saints and Soldiers Alike – The Spear; Canine Companions in Military Roles During the Middle Ages – Let Slip the Dogs of War; The Works of Brunner, Delbruck, and Oman – The Science of the Heavy Cavalryman; The Kingdom That Never Was – Fergus of Gallowa; The Welsh Castles of Edward I – Colonization Set in Stone. $12.00 USD