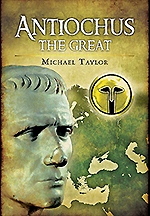 All of us here at OMM wish you a Happy and Healthy New Year.

THE SILVER BAYONET: The Russian Unit 28mm Figures The figures represent: Your Officer, a Werebear, a Champion of the Faith, a Light Cavalyman, an Infantryman, a Rifleman, a Supernatural Investigator, and a Veteran Hunter. All figures are 28mm-sized, made of metal, and supplied unpainted. $39.00 USD

THE SILVER BAYONET: The Austrian Unit 28mm Figures The figures represent: A Strategist, a Dhamphir, a Grenadier, an Artillerist, an Occultist, an Infantryman, a Supernatural Investigator, and a Veteran Hunter. All figures are 28mm-sized, made of metal, and supplied unpainted. $39.00 USD

THE SILVER BAYONET: The Prussian Unit 28mm Figures The figures represent: A Light cavalryman, a Swordsman, an Infantryman, an Occultist, a Doctor, a Rifleman, a Strategist, and a Veteran Hunter. All figures are 28mm-sized, made of metal, and supplied unpainted. $39.00 USD

ANTIOCHUS THE GREAT A teenage king in 223BC, Antiochus III inherited an empire in shambles, ravaged by civil strife, and eroded by territorial secessions. He proved himself a true heir of Alexander: he defeated rebel armies and embarked on a campaign of conquest and reunification. At the height of his powers, he challenged growing Roman power, unimpressed by their recent successes against Carthage and Macedon. His expeditionary force was crushed at Thermopylae and evacuated. Refusing to bow before Roman demands, Antiochus energetically mobilized against Roman invasion, but was again decisively defeated at the epic battle of Magnesia. $27.00 USD

THE GREEK HOPLITE PHALANX: The Iconic Heavy Infantry of the Classical Greek World Overview of the current state of hoplite aspects, from fighting techniques to the social and economic background of the ‘hoplite revolution.’ Offers a new perspective on the hoplite phalanx by putting it in the context of other military developments in the Mediterranean world in the middle of the first millennium BC. Argues that the Greek phalanx was different in degree, but not in kind, from other contemporary heavy infantry formations and examines the similarities with other equivalent formations. $53.00 USD

THE LONG WAR FOR BRITANNIA 367-664: Arthur and the History of Post-Roman Britain Recounts some two centuries of ‘lost’ British history while providing decisive proof that multiple early record references recorded the same events in the same year. Asserts that only the transition to Anno Domini dating centuries afterward that distorts our perceptions. Demonstrates that King Arthur and Uther Pendragon are the very opposite of medieval fantasy. Current scholarly doubts arose from the fact that different British regions had very different memories of post-Roman British rulers. Some remembered Arthur as the ‘Proud Tyrant’, a monarch who plunged the island into civil war. Others recalled him as the British general who saved Britain when all seemed lost. The deeds of Uther Pendragon replicate the victories of the dread Mercian king Penda. These authentic-yet-radically-different narratives distort history to this very day. $43.00 USD

CHARLES X’S WARS: Volume 1 – Armies of the Swedish Deluge, 1655-1660 Describes and analyses the ‘Swedish Deluge’ (potop szwedski) – the devastating 1655-1660 wars fought between Sweden, the Polish-Lithuanian Commonwealth, Brandenburg-Prussia, Muscovite Russia, Transylvania, Cossack Ukraine, the Tatar Khanate of Crimea, and the Holy Roman Empire during the reign of Swedish King Charles X Gustavus. Focuses on the Swedish-Commonwealth war, which provoked the political and military collapse of the Commonwealth. However, since this conflict cannot be disentangled from the simultaneous wars between the Commonwealth and Muscovy, from 1654 to 1667, and between Sweden and Muscovy, from 1656 to 1661, both are described as well. Meanwhile, the Ukrainian Cossacks fought for freedom from what they perceived as the oppression of the Commonwealth. $40.00 USD

WE CAME, WE SAW, GOD CONQUERED: The Polish-Lithuanian Commonwealth’s military effort in the relief of Vienna, 1683 Detailed information about organization and strength of the army that Jan III led to Vienna: structure, weapons and equipment of the units, even on the company level. All formations, from winged hussars to artillery, are covered. Command staff – from King to high-ranking officers – will be presented as well. Book doesn’t focus solely on relief of Vienna though. Remaining actions of the 1683’s campaign are described as well, with both battles of Parkany and arrival of Lithuanian army, Polish and Cossack actions in Podolia and Moldavia, that were always in shadow of main events of 1683; finally organization and military actions of troops under command of Hieronim Augustyn Lubomirski, raised as Imperial auxiliary division in Poland. Includes 89 black-and-white ills, 16 black-and-white photos, 8 pages of color plates, six maps, and 50 tables. $45.00 USD

THESE DISTINGUISHED CORPS: British Grenadier and Light Infantry Battalions in the American Revolution Operational study of these battalions during the American Revolution, analyzing their creation, evolution and employment from the first day of hostilities through disbandment at the end of the war. Examines how and why these battalions were created, how they were maintained at optimal strength over eight years of war, how they were deployed tactically and managed administratively. Looks at the individual officers and soldiers who served in the battalions using first-hand accounts and other primary sources. Includes 24 black-and-white illustrations, one black-and-white photo, eight color illustrations, two color photos, eight pages of color plates, and 20 tables. $40.00 USD

WELLINGTON’S CAVALRY AND TECHNICAL CORPS 1800-1815: Including Artillery Covers British cavalry and artillery (foot and horse) of the Napoleonic Wars, as well as supporting units such as engineers, Royal Marines naval infantry, and some other ‘auxiliary’ corps (like the Yeomanry/militia cavalry or the Sea Fencibles, all very little known). Also covers mounted troops deployed in the various British colonies as well as foreign cavalry units in British service. Describes the history, organization, and uniforms of the various units in full detail and includes 50 color illustrations. $35.00 USD

REBELLION, INVASION AND OCCUPATION: The British Army in Ireland, 1793-1815 Analyzes the British Army in Ireland during the period 1793 to 1815, which proved to be a critical era in British and Irish history. The consequences of the events and government policies of that time helped to determine the social and political divisions within Ireland for the following two centuries. Includes 15 black-and-white illustrations, nine color illustrations, eight pages of color plates, one figure, and ten maps. $45.00 USD

L’INFANTERIE DE LIGNE: Volume 1: 1776-1820 For Napoleon, ‘the infantry is the soul of the army’ it effectively brings together most of the combatants present under the flags. Apart from the special case of the Imperial Guard, the French infantry was divided into two broad categories: line infantry and light infantry. The first forms the big battalion of this fighting mass. The 120 images and accompanying descriptions present the soldiers of the Line infantry from the infantry of Louis XVI to those of Charles X without forgetting, of course, the infantry of the Revolution and the Emperor’s grumblers. [French text] $40.00 USD

L’INFANTERIE DE LIGNE: Volume 2: 1814-1830 The Line Infantry suffered all the shocks of the last years of the Empire, from the French campaign to Waterloo, before radically changing its face in 1815, during the Second Restoration. [French text] $40.00 USD

SS FOREIGN DIVISIONS & VOLUNTEERS of Lithuania, Latvia and Estonia, 1941-1945: Images of War Series Offers a superb collection of rare and unpublished photographs. Unlike her Latvian neighbor, Lithuania had no plans to provide Germany with a National Legion. Although volunteers came forward, the majority did not. This was not the case for Latvia and Estonia, which undertook huge recruitment programs, and thousands of men were drafted into their own foreign legion of Waffen-SS Grenadier divisions. After intensive training, these divisions saw action on the Eastern Front, around Leningrad, and in the Ukraine, before defensive operations in the Baltic States in 1944. $23.00 USD

STUG III BRIGADE 191, 1940-1945: The Buffalo Brigade in Action in the Balkans, Greece and from Moscow to Kursk and Sevastopol Illustrated volume tells the tale of Brigade 191, AKA the ‘Buffalo Brigade,’ which used the Sturmgeschutz III as they took part in Operation Barbarossa in the Ukraine, saw action during the fight for Greece in 1941, and were deployed to the areas of heaviest fighting in the campaign against the Soviet Union. $35.00 USD

TANK BATTLES IN EAST PRUSSIA AND POLAND 1944-1945: Vilkavishkis, Gumbinnen/Nemmersdorf, Elbing, Wormditt/Frauenburg, Kielce/Lisow Paperback version of the brilliant study of tank warfare in the locales of the title. Lots of numerical data and tactical insight. Includes 373 black-and-white photos, 24 color maps, and 56 tables. Details a number of forgotten and overlooked armored engagements on the Eastern Front during the final year of the war, based firmly on Soviet and German archival records. This book also covers tank battles near Kielce, Poland in January 1945 where XXIV Panzer Korps (16th Panzer Division, 17th Panzer Division, 20th Panzer-Grenadier Division, 424th Schwere-Panzer-Abteilung) was engaged in an engagement lasting three days against forces of the Soviet 4th Guards Tank Army. The day-by-day coverage of events, honest views of the Soviet and German commanders, statistical data from both Russian and German viewpoints, and the ‘human element’ based on the exciting firsthand reminiscences of Soviet tank officers, all make this study an incredibly valuable source of information. The text is fully supported by specially commissioned color maps and an extensive selection of photographs, many from private collections. $55.00 USD

FIGHTING WITH THE FOURTEENTH ARMY IN BURMA: Original War Summaries of the Battle Against Japan 1943-1945 Presents original and authentic accounts from 13 divisions within 14th Army that battled the Japanese in Burma and India. These accounts are untouched by the pens of historians. Covers the complex campaign of 1943-1945 with detailed Orders of Battle throughout and includes citations for those actions which saw the award of the Victoria Cross. After the defeat of the Japanese, these divisions compiled a summary of their actions and it is these unique documents that form the basis of this book. $30.00 USD

TANK COMMANDER: From the Fall of France to the Defeat of Germany – The Memoirs of Bill Close Bill Close had a remarkable war. In campaign after campaign, from the defense of Calais in 1940 to the defeat of Germany in 1945, he served as a tank commander in the Royal Tank Regiment – and he survived. Records the day-to-day experience of his WWII tank crew. His tanks were hit 11 times by enemy shellfire and he bailed out. He was wounded three times. He finished the war as one of the most experienced and resourceful of British tank commanders, and in later life, he set down his wartime experiences in graphic detail. $30.00 USD

UNMANNED COMBAT AERIAL VEHICLES: Current Types, Ordnance and Operations First in a new series of Strategic Handbooks from Harpia Publishing presents an essential guide to the world of unmanned combat aerial vehicles (UCAVs). It features profiles of every UCAV currently in active military service or under development, as well as other unmanned aerial vehicles that could potentially be armed in the future. $85.00 USD