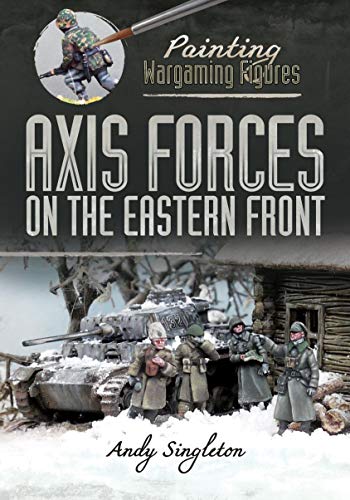 The shoppe continues not to be open for walk-in trade at this time.

However, if you wish to pick up your order at the store, call ahead and we can leave a package outside the door.

Axis Forces on the Eastern Front: Painting Wargames Figures. Next volume in the series offers professional painter Andy Singleton’s tips and techniques for painting Axis forces on WWII’s Eastern Front: Germans, Romanians, Hungarians and Italians and Finns. Each of the chapters contains instructions explaining the steps and colors required to paint the various uniforms used. The emphasis is on quickly achievable results and practical advice that is applicable to painting units or whole armies for wargaming purposes in a reasonable time frame. The techniques described are designed to easily be adaptable to figures of all sizes. This step-by-step guidance is primarily designed for those new to historical gaming, and includes initial preparation, assembly of figures, finishing, and basing. $27.00 USD

Crossfire: Rules & Organizations – Company Level WWII PDF version. Arty’s fast-paced WWII rules with focus on company-level infantry operations with no fixed turn length or need for rulers. Includes scenarios and quick-play sheets. All you need is 40 figures and maybe a couple of vehicles per side for an interesting game. $25.00 USD

021 Battle of the Atlantic 1942-45: The Climax of World War II’s Greatest Naval Campaign Air Campaign series. Second of two volumes explores the climactic events of the Battle of the Atlantic and reveals how airpower – both maritime patrol aircraft and carrier aircraft – ultimately proved to be the Allies’ most important weapon in one of the most bitterly fought naval campaigns of World War II. $24.00 USD

Hellenistic Land Battles 300-167 BCE. The Hellenistic Period (323-31 BCE) saw the Grecian phalanx – long dominant in Mediterranean warfare – challenged by legionary formations from the rising city-state of Rome. This book provides detailed tactical analyses for all 130 significant land engagements of Hellenistic armies 300-167 BCE. The Roman way of war would come to eclipse phalanx-based combat by the 160s, yet this was not evident at the time. Rome suffered numerous defeats against the phalanxes of Pyrrhus and Hannibal, its overseas campaign against the brilliant Spartan mercenary Xanthippus met disaster, and several Roman victories over Hellenistic foes were not decisive. The story of combat in this pivotal era is not well documented. Includes 21 photos, appendices, bibliography, and index. $45.00 USD

The Folly of Generals: How Eisenhower’s Broad Front Strategy Lengthened World War II. Analyzes critical mistakes made by the Allied supreme commander, General Dwight Eisenhower, in the last nine months of the war. Argues that had Eisenhower been more adept at taking advantage of several potential breakthroughs in the Siegfried Line in the fall of 1944, the war in the European Theater of Operations might have ended sooner. $35.00 USD

Courage Under Fire: The 101st Airborne’s Hidden Battle at Tam Ky. Fighting at Tam Ky by the 1st Brigade of the 101st Airborne began 15 May 1969, while the 101st’s 3rd Brigade battled on Hamburger Hill. The political consequences of Hamburger Hill’s high casualties caused Lamar Plain and its high casualties to remain classified and undisclosed. Uses declassified records and eyewitness accounts to follow Never Quit Delta company and its sister companies through 28 days of continuous combat at Tam Ky. $35.00 USD

Strategy & Tactics #328 Vicksburg May 1863. Vicksburg: The Assault on Stockade Redan (May 19th & 22nd 1863) is a two-player tactical wargame simulating the two Union assaults upon the Stockade Redan defensive position situated at the northeastern corner of the Vicksburg perimeter. Capturing the Redan does not automatically assure a Union victory. If and when the first or second Union assault succeeds, the players must then consult the Gettysburg Matrix to determine if the impending collapse of Vicksburg will prevent Robert E. Lee’s invasion of the North by compelling Jefferson Davis (who viewed Vicksburg as critical to the South’s survival) to refuse Lee’s risky plan to invade Pennsylvania, changing the course of the war. Scale: Each game turn is equal to 5 to 10 minutes of real time. Each hex represents 12.5 yards (22.8 meters). Each unit-counter represents a company or regiment, depending on the unit type. Components: One 22 x 34-inch map and 228 counters. $40.00 USD

Ancient Warfare: Volume 14.5 Breakaway Empires of the Third Century AD. Theme: Breakaway Empires of the Third Century AD: The Roman Empire in the Third Century AD: Crisis or Consequence; The Egyptian Revolt of Domitius Domitianus: A Brief Empire of Grain; A British Breakaway Empire: Imperium Britanniarum; The Cavalry Actions at Immae and Emesa: Horse Races for Empire; and The Franks, the Emperor Postumus, and the Big Nothing. Features: Military Exploration in the First Century AD: Roman Adventurers; Commemorating a Loyal Athenian Cavalryman: The Stele of Dexileos; The Reading Habits of Ancient Generals: Sleepless Nights; The Roman Marching Column: Order of March; The Mainz-Weisenau Helmet – Exception to the rule; and what if Macedon’s Greatest King had fought the Romans: Alexander in Italy, 317 BC. $12.00 USD

Ancient History Magazine #33: World of the Celts. Theme: World of the Celts: Reconstructing Ancient Societies: Who Were the Celts?; Early Iron Age Elites in the Low Countries: Fragmenting the Chieftain; Always Ready for a Fight: The Celts at War; Alcohol and Feasting in Celtic Culture: A Slave in Exchange for a Drink; and Warrior Queen and Feminist Icon: Boudicca. Features: Treasures of the Medelhavsmuseet: From Cyprus to Sweden; Archaeology and Roman Coins: Learning from Numismatics; One of Ancient Rome’s Most Beautiful Buildings: The Temple of Mars Ultor; From Popularity to Decline: Rome and the Cult of Isis; Hand Signs in the Arena: Pollice Verso; Roman-style Cheese Sandwiches: Say Cheese! $12.00 USD