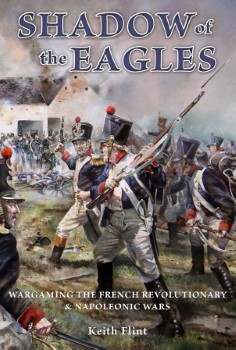 The shoppe continues not to be open for walk-in trade at this time.

However, if you wish to pick up your order at the store, call ahead and we can leave a package outside the door.

SHADOW OF THE EAGLES: Wargames Rules for the French Revolutionary and Napoleonic Wars Divisional-level game where player controls three to five brigades totaling about 20 units with game lasting a couple hours. By designer of Osprey‘s Honours of War. Basic units are infantry battalions, cavalry regiments and artillery batteries. Basic structure of Shadow of the Eagles is IGO-UGO, although firing and close combat are simultaneous. Games generally begin with some form of preparatory barrage. There is no separate morale phase, nor are there any old school ‘morale tests’. Includes three scenarios. Hardback. Full-color throughout. $49.00 USD

ABSOLUTE EMPEROR: Napoleonic Wargame Battles Players’ armies are composed of multiple corps, with command and control being of the utmost importance, all influenced by the elan of your general. $20.00 USD

JACKALS: The Fall of the Children of Bronze Grand campaign for Jackals, and includes 14 adventures spanning nine years. Players will explore the ancient myths and legends of the War Road, including the bustling streets of Ameena Noani in the north, Sentem in the south, abandoned temples in the wastes, and mansions deep within the earth. They will encounter beings and powers from the past – ancient but far from dormant – and come face to face with the hidden hand that would tear down the Law of Men bring chaos to the Zaharets. $35.00 USD

IMPERIUM: Classics Stand-alone deck-building card game contains the Carthaginian, Celt, Greek, Macedonian, Persian, Roman, Scythian, and Viking civilizations and an individual solo opponent behaving as each nation. It is fully compatible with Imperium: Legends for players wanting to expand their pool of civilizations. In your hands lies the destiny of one of history’s great civilizations. Under constant threat of attack, you must conquer new lands, oversee dramatic scientific and cultural advances, and lead your people into the era of empire. Expand too rapidly, and unrest will bring your civilization to its knees; build up too slowly, however, and you might find yourself a mere footnote of history. $40.00 USD

IMPERIUM: Legends Stand-alone deck-building card game contains challenging civilizations: Arthurians, Utopians, Atlantians, Egyptians, Mauryan, Minoan, Olmec, and Qin civilizations, each of which can be played against solo. It is fully compatible with Imperium: Classics for players wanting to expand their pool of civilizations. $40.00 USD

238 BATTLE TACTICS OF THE AMERICAN REVOLUTION Elite series. Investigates the various participants’ battlefield tactics, casting light on how tactical theory and battlefield experience shaped the conduct of battle in the American Revolution. $20.00 USD

GORDIAN III AND PHILIP THE ARAB: The Roman Empire at a Crossroads Dual biography of the emperors Marcus Antonius Gordianus (‘Gordian III’, reigned 238-244) and Marcus Julius Philippus Augustus (‘Philip the Arab’, reigned 244-249), focusing mainly on the political and military events during this crucial stage of the ‘Third Century Crisis’. Includes 75 color and black-and-white illustrations. The tumultuous ‘Year of the Six Emperors’ saw Gordian raised to the purple at just 13 years old, becoming the youngest emperor in the Empire’s history at a time when the borders were threatened by the powerful Sassanid Persians and the Goths, among others. Gordian died on a campaign against the Persians, either in battle or possibly murdered by his own men. Philip succeeded Gordian, made peace with Shapur I, and returned to Italy. His reign encompassed the spectacular celebration of Rome’s millennium in 248, but the wars in the Balkans and East together with crippling taxation led to mutinies and rebellions. Philip and his brother had until then fought successfully against the Persians and others, but this did not save Philip, who was killed by a usurper’s forces at the Battle of Verona in 249. $43.00 USD

NEVER GREATER SLAUGHTER: Brunanburh and the Birth of England Late in AD 937, four armies met in a place called Brunanburh. On one side stood the shield-wall of the expanding kingdom of the Anglo-Saxons. On the other side stood a remarkable alliance of rival kings – at least two from across the sea – who’d come together to conquer England once and for all. Brunanburh may not today have the fame of Hastings, Crecy or Agincourt, but those later battles, fought for England, would not exist were it not for Brunanburh. Generations later it was simply called the ‘great battle,’ but its location has been lost for centuries. Today, an extraordinary amateur and professional effort, uniting enthusiasts, historians, archaeologists, linguists and other researchers, may well have found the battle site of Brunanburh. This new book describes the discovery and delves into the battle. $28.00 USD

A MORTAL BLOW FOR THE CONFEDERACY: The Fall of New Orleans, 1862 If the Union could capture and control New Orleans, important port and control point of the Mississippi River, it would be a mortal blow to the Confederate economy. Union Adm. David G. Farragut, a native New Orleanian, would lead a formidable naval flotilla and attack the city. Includes 150 images and 10 maps. In the city, Confederate General Mansfield Lovell, a new commander, was thrust into the middle of command chaos. He was hamstrung by conflicting orders from Richmond, and lacked both proper seagoing reconnaissance and unity of command. He was poised to become a scapegoat. $35.00 USD

FIGHTERS OF THE IRON CROSS: Men and Machines of the Jagdwaffe Oversized 9×12-inch, full-color book featuring 14 different fighter pilots who flew FW-190s and Bf-109s. Research for this book, including pilot interviews and flightbook access, began in the 1960s. $85.00 USD

SOVIET T-62 MAIN BATTLE TANK The T-62 is one of the most widespread tanks used by the Soviets during the Cold War. Developed from the T-55, the T-62 enjoyed a long career in the Red Army and even into the early days of the reformed Russian Army. It was the principal tank used by Soviet forces in the Soviet-Afghan War, and went on to see service with Russian forces in Chechnya and South Ossetia. It has also been employed in almost every conflict in the Middle East and Africa from its introduction into service. It remains in service with many countries throughout the world, and has seen a great deal of use in the Syrian Civil War. Written by two experts on Soviet armor, it contains more than 400 stunning contemporary and modern photographs. $40.00 USD

WARSHIP 2021 For over 40 years, Warship has been the leading annual resource on the design, development and deployment of the world’s combat ships. Featuring a broad range of articles from a select panel of distinguished international contributors, this latest volume combines original research, new book reviews, warship notes, an image gallery, and much more, maintaining the impressive standards of scholarship and research for which Warship has become synonymous. Detailed and accurate information is the keynote of all the articles, which are fully supported by plans, data tables, and stunning photographs. $60.00 USD

UNDER THE SOUTHERN CROSS: The South Pacific Air Campaign Against Rabaul From August 7, 1942, until February 24, 1944, the U.S. Navy fought the most difficult campaign in its history. Between the landing of the 1st Marine Division on Guadalcanal and the final withdrawal of the Imperial Japanese Navy from its main South Pacific base at Rabaul, the U.S. Navy suffered such high personnel losses that for years it refused to publicly release total casualty figures. $30.00 USD

NO WIDER WAR: A History of the Vietnam War – Volume 2: 1965-75 Second volume of a two-part exploration of America’s involvement in Indochina from the end of World War II to the Fall of Saigon. This traces American involvement in the Vietnam War from the first Marines landing at Da Nang in 1965, through the traumatic Tet Offensive of 1968, the gradual Vietnamisation of the war, the withdrawal of American forces, and the final loss of the South in 1975. $40.00 USD