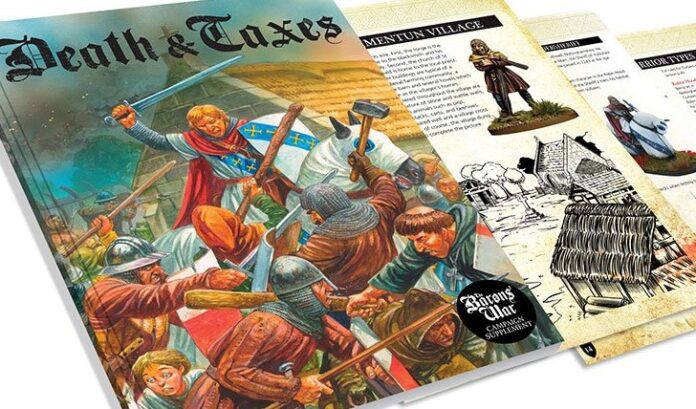 Most items listed below due into the shoppe in January. Holiday shipping time is getting tight.

The Barons War: Death & Taxes. First supplement designed for The Barons’ War skirmish game. Play your way through the linked scenario-driven campaign, choosing either the forces of the Sheriff of Nottinghamshire or local outlaws sworn to protect the villagers, who are objecting to paying taxes twice. Further rules are included for developing and running exciting stand-alone seasonal campaigns where individual Commanders strive to be the most chivalrous while battling it out over a campaign map to conquer territory. Includes a linked campaign, the Outlaw retinue list, and rules for running a map-based campaign. $26.00 USD

Waking the Bear: A Guide to Wargaming the Great Northern and Turkish Wars 1700-1721. Offers a general understanding of the historical background to the Great Northern War and to the main combatants: Russia, Sweden, Denmark, Hanover & Holstein, Ottoman Empire, Saxony, Poland, Prussia and Cossack nations. Examines naval landings, siege warfare, traditional battles, and lesser known battles. Battle reports focus on small evening games utilizing a small number of units and therefore achievable by the majority of wargamers. Options are included to turn a number of these into larger multi-player games. Also covers events on Russia’s southern borders with the Ottoman Empire and there are gaming suggestions for the continuation of the conflict on Russia’s eastern border with China. Includes almost 100 unit and individual figure photographs from several renowned collections. $38.00 USD

056 The Viking Siege of Paris: Longships Raid the Seine AD 885-86 Raid series. Fully illustrated volume, accompanied with maps and strategic diagrams, tells the full story of the Vikings’ expedition to conquer medieval Paris. In 885, a year after Charles the Fat was crowned King of the Franks, Danish Vikings sailed up the Seine demanding tribute. The Franks’ refusal prompted the Vikings to lay siege to Paris, which was initially defended by only 200 men under Odo, Count of Paris, and seemingly in a poor state to defend against the Viking warriors in their fleet of hundreds of longships. $22.00 USD

061 Seminole Warrior vs U.S. Soldier: Second Seminole War 1835-42 Combat Men series. Assesses the forces fighting on both sides, casting light on the tactics, weaponry and combat record of the Seminole warriors and their U.S. opponents during the Second Seminole War in Florida. On December 28, 1835, troops led by Major Francis Langhorne Dade were ambushed and massacred en route to Fort King. Two years of guerrilla warfare ensued, as the Seminoles evaded the U.S. forces sent to defeat them. Ordered to hunt down the Seminoles, a U.S. force led by Colonel Zachary Taylor incurred heavy losses at the Battle of Lake Okeechobee (December 25, 1837), but the Seminoles were forced to withdraw. At the battle of the Loxahatchee River (January 24, 1838), forces led by Major General Thomas S. Jesup encountered a large group of Seminoles and met them with overwhelming numbers and greater firepower. $22.00 USD

118 Tiger vs Churchill: North-West Europe 1944-45 Duel series. Explores the design and development of these famous tanks, their head-to-head encounters, the effectiveness of the support services each tank relied upon, and the skills and experiences of the crews that fought in them. The specific battlefield conditions of Normandy in June and July 1944 are also examined. $22.00 USD

038 Vietnam War 1956-75 Essential Histories series. Updated and revised, it includes updates from the author, specially commissioned maps, and 50 new images, this is a concise overview of America’s most divisive war. Examines the brutal and prolonged guerrilla war and how its consequences would change America forever, leaving the country battered and unsure as it sought to face the challenges of the final acts of the Cold War. As for Vietnam, the conflict would continue long after the U.S. had exited its military adventure in Southeast Asia. $20.00 USD

051 Franco Prussian War 1870-71 Essential Histories series. With updates from the author, specially commissioned full-color maps and 50 new images, this is a concise overview of the Franco-Prussian War. Examines the build-up, battles, and impact of the war, which was an overwhelming Prussian victory with massive consequences. The French Second Empire collapsed, Napoleon III became an exile in Britain, and King Wilhelm I was proclaimed Emperor of the new united Germany. In the peace settlement that followed, Germany gained the eastern French provinces of Alsace and Lorraine, areas that were to provide a bone of contention for years to come. $20.00 USD

142 RAF Tornado Units in Combat 1992-2019 Combat Aircraft series. Provides detailed first-hand accounts of the missions undertaken by the Tornado crews during the most recent conflicts over the Middle East and the Balkans. After the Gulf War of 1990, No Fly Zones (NFZ) were established over northern and southern Iraq, and the Tornado GR 1 force stepped up to operations over the southern NFZ. $24.00 USD

143 F3D/EF-10 Skyknight Units of the Korean and Vietnam Wars Combat Aircraft series. Explores the Douglas F3D Skynights and their deployment during the Korean and Vietnam wars, using first-hand accounts from aircrew, original photographs, and 30 profile artworks to explore their key roles as an escort aircraft and electronic warfare aircraft. $24.00 USD

302 Tanks in the Battle for Germany 1945: Western Front New Vanguard series. Packed with information on tank numbers, types and comparative performance, this book examines the two sides’ tanks, organization and doctrine, and explains how the ultimate tank battles of World War II were really fought. $19.00 USD

239 Armies of the Iran-Iraq War 1980-88 Elite series. Investigates the organization, appearance, and equipment of the ground forces of both sides in the Iran-Iraq War, including Iraq’s Republican Guards and Iran’s Pasdaran or Islamic Revolutionary Guard Corps. The war resulted in stalemate with some half a million dead and at least as many wounded. The financial costs incurred in waging such a long and debilitating war were one of the spurs that led Saddam Hussein to invade Kuwait barely two years later. $20.00 USD

542 Yugoslav Armies 1941-45 Men at Arms series. Using meticulously-drawn illustrations of different insignia, uniforms, and equipment from each faction to describe in detail the political and military implications of the war and how it was fought, setting the scene for the subsequent rise of Tito to power within Yugoslavia. $19.00 USD

America’s Few: Marine Aces of the South Pacific. Delves into the history and development of U.S. Marine Corps aviation in World War II, following the feats of the Corps’ top-scoring aces in the skies over Guadalcanal. Of the twelve Allied fighter squadrons that were part of the Cactus Air Force, eight were U.S.M.C. squadrons. It was over Guadalcanal that Joe Foss emerged as a symbol of Marine aviation. As commander of VMF-121, he organized a group of fighter pilots that downed 72 enemy aircraft; Foss himself reached a score of 26. Pappy Boyington, meanwhile, had become a Marine aviator in 1935. Best known as the commander of VMF-214, he came into his own in late 1943 and eventually matched Foss’s aerial victory score. Includes parallel stories of many other Marine aces, such as Ken Walsh (21 victories), Don Aldrich (20), John L. Smith (19), Wilbur Thomas (18.5), and Marion Carl (18.5). $35.00 USD

Barbarossa Campaign in 1941: Hungarian Perspective. The first major campaign the Royal Hungarian Army fought against the Red Army in Ukraine from July until November of 1941. The Barbarossa campaign started on 22 June 1941, pitting the forces of the Soviet Union against those of the Third Reich and its allies. Hungary was among the less willing allies who participated on the side of the Germans. The Hungarian involvement during the first phase of the war against the Soviet Union was minimal. On the other hand, the Hungarian committed their most modern, partially motorized units – the Mobile Corps, the elite mountain jagers and border guard troops of the VIII Corps, and selected units of the Royal Hungarian Air Force. $47.00 USD

The Army of Alexander the Great. An investigation into every aspect of the Macedonian forces, analyzing the recruitment, equipment, organization, tactics and command, and control of the fighting arms. Includes black-and-white illustrations, notes, bibliography, and index. $27.00 USD

Wargames Illustrated: Issue #409 Theme: Global Wargaming: Potential: A tour of the gaming potential offered by military history away from the usual suspects and locations; A World of Painting: The Analogue Hobbies Painting Challenge: Online gathering that encourages hobbyists from around the world to get through their painting backlog; Five Centuries of Warfare in New Zealand: Varied conflicts fought in Aotearoa across the years; Rude Health? A broad look at the international perspective of our hobby via the show/convention circuit, plus an introspective look at where we find ourselves in a new-normal world; Going Tribal: Introduction to tribal combat and the concepts of new game Tribal. Also: Salute 2021: Coverage of this year’s Salute, before taking you on a tour of some of our favorite games and hearing from some of the traders; The Salute Painting Competition: A look at some of the winners and get an entrant’s eye view. And more… $9.00 USD