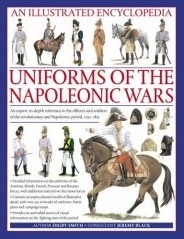 The Uniforms of the Roman World: An Illustrated Encyclopedia. Back in print. Oversized at 8.5 x 11 inches. A detailed study of the armies of Rome and their enemies, including the Etruscans, Gauls, Huns, Sassaids, Persians, and Turks. Considerable number of illustrations to get you painting up ancient armies. $35.00 USD

The Uniforms of the Napoleonic Wars: An Illustrated Encyclopedia. Back in print. Oversized at 8.5 x 11 inches. Contains 550+ color illustrations, maps, and uniform details on all the major forces and many of the minor countries. $35.00 USD

The Art of Shooting Great Ordnance: A History of the Development, Manufacture and Use of Artillery, 1494-1628. The period 1494-1628 was critical in the history of artillery. Guns, gunpowder, and gun carriages underwent such major transformations that they would remain virtually unchanged for three centuries. This book explains the development and use of artillery during this critical period. The forge and foundry where they were made and the lives of the men who made them are also thoroughly investigated. Starts with the development of medieval artillery and then establishes the real significance of the French invasion of Italy in 1494 – often seen as the beginning of an artillery revolution. The development of a new artillery in the late medieval period contributed to the events of 1494 and confirmed the significance of these changes in the popular imagination and in the minds of later historians. Includes 124 black-and-white illustrations, 39 black-and-white photos, 9 color illustrations, 15 color photos, and 37 tables. $50.00 USD

Byzantine Fortifications: Protecting the Roman Empire in the East. This ambitious study combines the results of decades of wide-ranging archaeological work with an account of the armies, weapons, tactics, and defensive strategies of the Byzantine Empire throughout its long history. Covers their construction, development, and their role in times of war in every region of the Empire, from those in Mesopotamia, Syria and Africa, to those in Asia Minor, the Aegean and the Balkan peninsula. $43.00 USD

Why the Germans Lost: The Rise and Fall of the Black Eagle. Charts the ups and downs of the German army from the days of Frederick the Great to the dying days of WWII. It passes through the Napoleonic period, takes in the growth of war machinery under the leadership of Clausewitz and Moltke, and acquaints the reader with the various victories won against Austria in 1866 and France in 1870. It then moves forwards into the 20th Century, following the course of the Imperial German army, its successes and ultimate failure in the Great War, its recovery in the inter-war years, and its final successes and destruction under the leadership of Hitler. $30.00 USD

Genghis Khan and the Mongol War Machine. As a soldier and general, statesman and empire-builder, Genghis Khan is an almost legendary figure. His remarkable achievements and his ruthless methods have given rise to a sinister reputation. He possessed exceptional gifts as a leader and manager of men – and ranks among the greatest military commanders – but he can only be properly understood in terms of the Mongol society and traditions. The military and cultural background of the Mongols and the nature of steppe societies and their armies are major themes of his book. He looks in detail at the military skills, tactics, and ethos of the Mongol soldiers, and at the advantages and disadvantages they had in combat with the soldiers of more settled societies. Offers a fresh perspective on Genghis Khan the man and the armies he led. $27.00 USD

The Adventures of a Freikorps Commander: Memoirs of Frederick the Great’s Swedish Adventurer – Volume 1: 1697-1746 . Facsimile of the 1806 edition but with new 18-page introduction by Stephen Summerfield. Includes six maps and additional illustrations in text. General De Hordt will be familiar to many because of his famous Freikorps regiment. His story, as elaborated in his extraordinarily rare memoir, is a uniquely readable personal study of his life and times. It is rich with diplomacy at the highest level (De Hordt was well known at the courts of Sweden, Prussia and Russia) as well as remarkable insights into campaigning in the field. He left Sweden to join Dutch service in 1744; under the Duke of Cumberland he fought in the Fontenoy campaign, then the Low Countries against Marshal De Saxe; after a short retirement, he fled Sweden after a failed palace coup and accepted service under Frederick the Great – forming his famous regiment. In 1758, he was taken prisoner by Cossacks and confined in the Peter-Paul Fortress until released by Tsar Peter III. He ended his career as a valuable companion for Prince Henry of Prussia on his missions abroad. Please note this is a facsimile of the original text. $40.00 USD

The Adventures of a Freikorps Commander: Memoirs of Frederick the Great’s Swedish Adventurer – Volume 2: 1747-1762. Continues the memoirs. $40.00 USD

The Adventures of a Freikorps Commander: Memoirs of Frederick the Great’s Swedish Adventurer – Volume 3: 1763-1798. Continues the memoirs. $40.00 USD

Dunmore’s War: The Last Conflict of America’s Colonial Era. Known to history as Dunmore’s War, the 1774 campaign against a Shawnee-led Indian confederacy in the Ohio Country marked the final time an American colonial militia took to the field in His Majesty’s service and under royal command. Led by John Murray, the fourth Earl of Dunmore and royal governor of Virginia, a force of colonials including George Rogers Clark, Daniel Morgan, Michael Cresap, Adam Stephen, and Andrew Lewis successfully drove the Indians from the territory south of the Ohio River in parts of present-day West Virginia, Ohio and Kentucky. Although it proved to be the last Indian conflict of America’s colonial era, it is often neglected in histories, despite its major influence on the conduct of the Revolutionary War that followed. $26.00 USD

Polish Eyewitnesses to Napoleon’s Last Campaigns: 1814-15. These eyewitness accounts by Polish soldiers tells their story of the campaign in France in spring 1814, when Napoleon once again revealed his true genius for waging war. Napoleon finally had to accept defeat and was exiled to Elba with a small contingent of his Imperial Guard – including a squadron of the famous Polish Lancers. This handful of loyal Poles returned with him when he escaped from Elba in 1815, and fought during the 100 Days and at Waterloo. They describe vividly the battles, sieges, the agonies of their final surrender, and the uncertainties surrounding their return home to a very different Poland. Includes many illustrations and maps. $40.00 USD

German States Against Napoleon: Brunswickers, Russo-German Legion, and Saxon Duchies (1796-1815). Includes 32 maps, 17 OOBs, and 16 tables, plus chapters by Stephen Summerfield with details of uniforms and flags with black and white illustrations. This volume covers minor German states that fought against the French (1796-1815) based upon three regimental histories. In 1809, the Black Brunswickers made their valiant march to the North Sea after the defeat of Austria. They fought in Spain (1810-14) and at Quatre Bras and Waterloo. The Russo-German Legion was formed by the Russians from mainly German volunteers in 1812, before it transferred to British pay. The rifle-armed Saxe-Weimar Scharpschutzen Battalion fought with the Prussians at Auerstedt in 1806. In 1807, the contingent formed the III/4th Rheinbund Saxon Duchies Regiment that fought in the Tyrol (1809), the Peninsular War (1810-11), near Vilnius in 1812, and the defense of Danzig (1813). The captured Thuringian Battalion fought against Napoleon at Leipzig (1813). $50.00 USD

Fighting for Napoleon: French Soldiers’ Letters 1799-1815. The French side of the Napoleonic Wars is often seen from a strategic point of view, or in terms of military organization and battlefield tactics, or through officers’ memoirs. It is rarely seen from the perspective of the lowest ranks of the army, and the experience of the ordinary soldiers is less well known and is often misunderstood. That is why this account, based on more than 1,600 letters written by French soldiers of the Napoleonic armies, is of such value. It adds to the existing literature by exploring every aspect of the life of a French soldier during the period 1799-1815. $30.00 USD

James Longstreet and the American Civil War: The Confederate General Who Fought the Next War. Longstreet understood early that the tactical defense was generally dominant over the offense, which was something few grasped in 1862. Longstreet’s thinking demonstrated a clear evolution that began on the field at First Manassas in July 1861, developed through the bloody fighting of 1862, and culminated in the brilliant defensive victory at Fredericksburg that December. The lethality with which his riflemen and artillery mowed down repeated Union assaults hinted at what was to come in WWI. Longstreet’s ability to launch and control powerful offensives was on display at Second Manassas in August 1862. His assault plan at Chickamauga in Georgia the following September was similar, if not the forerunner to, World War II tactical-level German armored tactics. Other areas show progressive applications with artillery, staff work, force projection, and operational-level thinking. $33.00 USD

France at Bay 1870-1871: The Struggle for Paris. The Franco-Prussian War did not end with the catastrophic French defeat at Sedan on 1 September 1870, when an entire French army surrendered, the Emperor Napoleon III was captured and his regime collapsed. The war went on for another five agonizing months, and resolved itself into a contest for Paris – while Paris held out, France was undefeated. The story of this dramatic final phase of the war weaves a tale of military victory and defeat into a gripping narrative and it sets the extraordinary events of nearly 150 years ago in the wider context of European history. $30.00 USD

Zeppelin Inferno: The Forgotten Blitz 1916. The WWI German air campaign against Britain was the first sustained strategic aerial bombing campaign in history. Despite this, it has become forgotten against the enormity of the WWII bombing campaigns. Tells the full story of the 1916 raids in unprecedented detail in what is the second book in a trilogy. $43.00 USD

To the Gate of Hell: A Memoir of a Panzer Crewman. Until seriously wounded in August 1944, when he was badly burned when his tank was hit and caught fire during fighting in southern Poland, Armin Bottger experienced the horrors of the WWII Eastern Front from the perspective of a tank radio operator in the 24th Panzer Division. In this memoir, he gives a full and honest account of his wartime career, encompassing both the hellish terror of combat and the everyday annoyances and injustices of army life in wartime. He graphically portrays the reality of war on the Eastern Front, without heroics and told with contempt for the high command and the Nazi leadership. $27.00 USD