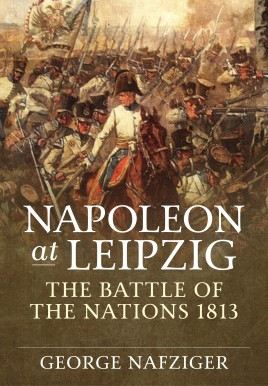 We’re offering 40% off premier Napoleonic books from Emperor’s Press. This is a great way to fill in your collection with a discount!

We also are listing some regular-priced, just-released Napoleonic books.

Napoleon at Leipzig: The Battle of Nations 1813. At 432 pages, an exhaustive study in the same vein as Lutzen and Bautzen and Napoleon at Dresden. Includes black-and-white illustrations and maps, bibliography and index. By Nafziger. $70.00 USD

Napoleon’s Finest: Marshall Davout’s 3rd Corps. This is the first English translation of the Journal of Operations, 1805-1807, and includes 30+ color maps, OOBs, and primary source. The original book, titled Operations du 3e Corps, was published by Davout’s nephew in 1896. Marshal Davout’s military papers, presented to the French Ministry for War in 1874 by his heirs, represent an invaluable primary source to the study of the first campaigns of Emperor Napoleon’s new Grande Armee. These include the actual after-action reports filed by Davout’s brigade, division, and other commanders, and they detail the marches and combat these officers personally directed. They provide an amazing historical window on the campaigns in Germany and Poland. Our new book, the first translation of the original into English by award-winning author and historian Scott Bowden, features additional analysis, color maps, color orders of battle, officer biographies, and other material designed to supplement the original work and place it in context. $169.00 USD

Eagles Over the ALPS: Suvorov in Italy/Switzerland. Oversize at 8.5 x 11-inches, this includes maps, complete orders of battle, and full details of the military units, along with a gripping campaign narrative that saw several victories by the Russian general. Includes bibliography and index. By Christopher Duffy. $35.00 USD

Poles and Saxons of the Napoleonic Wars. A complete treatment of these key French allies, including OOBs and 16 color plates. By Nafziger, Wisoloski, and Devoe. $35.00 USD

Napoleon’s Last Grande Armee: 1813 French Uniforms. Portraits from the Dresden and Freiberg Manuscripts of 1813. Illustrated by two German artists of the French troops in Saxony at these cities with 148 uniform plates. During the summer armistice of the 1813 campaign, two German artists drew illustrations of the French troops stationed around Dresden and Freiberg in Saxony. The men depicted belonged to Emperor Napoleon’s last Grande Armee, a colorful multinational force that included, among others, French, Dutch, Italian and Polish soldiers.

Nearly a century after they were first rendered, French historian and collector Gabriel Cottreau commissioned Charles Brun, one of the foremost artists of the era, to copy 98 of the original images from both portfolios. Sadly, many of the original uniform plates were later destroyed, lost or disappeared into private collections. In 2000, some of the original plates resurfaced and permission to publish them, along with the 98 Brun copies, was obtained. We are extremely pleased to offer a book featuring 148 uniform plates, including 50 original Freiberg plates, plus the entire Brun collection. This extraordinary publication includes new descriptive text in English by renowned uniformologist Alfred Umhey. Nearly every plate is presented at its full original size on heavy art paper along with the artist’s original notes, translated for this edition. $250.00 USD

Hanau 1813: Napoleon’s Retreat from Leipzig. Full-color, large-format hardback explores Napoleon’s retreat from Leipzig and his last victory in Germany at Hanau (30-31 October 1813) over the Austro-Bavarian Army of General von Wrede. To appreciate his victory, it is necessary to explore the reasons for the allied poor pursuit, the battle, the tactics, the armies, and the artillery. By Summerfield. $59.00 USD

Napoleon’s German Division in Spain – Volume 4: 2nd Nassau Regiment in Spain 1809-14 and in the Netherlands 1814-15. Includes illustrations, 15 maps, 16 orders of battle, and eleven tables. This volume is based upon two earlier German regimental histories never before translated. They cover the many mostly small engagements that involved the regiments in the Peninsula from 1809 to the closing campaign in 1813. The volume then completes their service by an account of the Battle of Waterloo. By Digby Smith. $48.00 USD

Visit onmilitarymatters.com for information on all stocked items. If you have a further question about an item or you wish to order, email militarymatters@att.net or phone 609-466-2329.