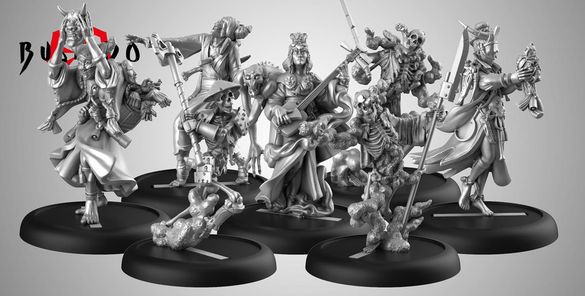 GCT Studios has posted their May releases on their Facebook Page and included pictures of each Miniature in their Bushido range that they are releasing. From the release”

This wave will be available for preorder on 17th April and will be released in May.

• Yuta of Yurei Themed Warband. The three fell-hearted sisters haunt the dark places of Jwar and combine their powers to cast some of the most potent and expensive Ki feats in the game to further their plans of ill-intent.

• Eldest Brother. Although his origin is shrouded in mystery, what is known is that his loyalty to Shiho Hiroto is unquestionable. Eldest Brother is a brute in combat, tempering his rage with the teachings from his time in the Temple.

•Shiho Hiroto. The Black Eagle Has Landed! In his fallen father’s battle armour, Shiho Hiroto strides the Isles of Jwar hellbent on revenge! Hiroto provides his Warband with unprecedented options while also having the ability to fight any model with both confidence and cunning.

• Hitokuchi. Big and bulky yet uncannily fast, this razor-toothed Great White Shark slices through melee with nonstop aggression. His savage nature dictates that he eat what he kills, allowing Hitokuchi to heal any damage sustained on the field of battle.

•Ook. Bakemono bodyguards are notoriously tricky and untrustworthy but as a Guardian of the Shadow Council, Ook is ever loyal to the Bakemono’s twilight cause. Ook offers unseen options to a Bakemono horde with robust melee ability, and a range of valuable attacks and defences.

• Ito Akane. Ever known for her cruel and sadistic behaviour on and off the battlefield, Akane delights in using her spear to impale her foes, then standing back to watch them die. Able to grant her weapon poison, even a single point of damage in melee will be devastating to even the toughest Minimoto Samurai!