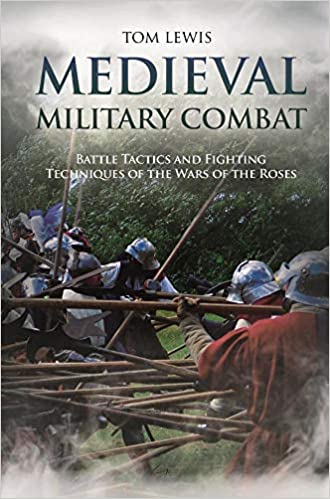 Reminder: OMM continues to remain open for internet orders and shipping. The shoppe continues not to be open for walk-in trade at this time. However, if you wish to pick up your order at the store, call ahead and we can leave a package outside the door. Most items due into the shoppe in a couple weeks.

Belloludi Rifles: World War I Skirmish Rules & Cards Bundle. These rules will give you the options of playing the first skirmishes of 1914, the trench warfare that dominated the middle of the war, and the combined arms tactics that were developed at the end of the war. $49.00 USD

Medieval Military Combat: Battle Tactics and Fighting Techniques of the Wars of the Roses. A concise explanation of how other accounts, and popular culture such as films, have misrepresented medieval warfare. Shows the techniques and tactics in such battles and uses the Battle of Towton as the base line for its overall study. Also breaks new ground in establishing medieval battle numbers. How did armored medieval soldiers fight? Did they just walk forward and smash each other with their maces and poleaxes for hours on end, as depicted on film and in programs such as Game of Thrones? Hardly. It is impossible to fight in such a manner for more than several minutes due to exhaustion setting in. Indeed, we know more about how the Roman and Greek armies fought than we do of the 1300 to 1550 period, but a re-examination and re-interpretation of the historical accounts offers insight. $35.00 USD

Hellenistic Land Battles 300-167 BCE. Biography of Themistocles of Athens, architect of the Greek victory over the Persian invasions of 490 BC and 480 to 479 BC. While his role in the Persian wars is naturally a major theme, Themistocles’ career before and after those conflicts is also covered in detail. Themistocles was a leading exponent of a new kind of populist politics in the young democracy of Athens, manipulating the practice of ostracism (exile) to get rid of his political rivals. Themistocles’ rises to a position of virtual hegemony which allowed him to institute his far-sighted policy of preparation against the growing Persian threat. In particular, he strengthened Athens’ fleet and thereby secured the support of the poor thetes, who found employment as rowers. During the first invasion, Themistocles fought, and possibly held joint command, at the decisive battle of Marathon. When the Persians struck again in 480, he commanded the fleet at Artemisium and Salamis. The latter battle he won by subterfuge and secured Athens’ liberation and survival. Ironically he was himself eventually ostracized by his fellow citizens and ultimately entered Persian service, ending his days as governor of Magnesia in Asia Minor. $35.00 USD

The Lost Samurai: Japanese Mercenaries in South East Asia 1593-1688. Reveals the greatest untold story of Japanese samurai warriors – for almost 100 years, were employed as mercenaries in the service of the kings of Siam, Cambodia, Burma, Spain, Portugal, and Dutch East India Company. They were used in dramatic assault parties, as royal bodyguards, as garrisons, and as willing executioners. As a result, a stereotypical image of the fierce Japanese warrior developed that had a profound influence on the way they were regarded by their employers. $35.00 USD

U.S. Airborne Tanks 1939-1945. Opens with an investigation into the 1930s efforts by Britain, the Soviet Union, and the U.S.A. into the development of, or adaptation of, light tanks for airborne operations. WWII accelerated their efforts, but conventional aircraft limited use to existing airfields, negating the effect. Development shifted to gliders and the 28th Airborne Tank Battalion was born. Detailed and comprehensive study covers design and deployment of American airborne tanks from the earliest concepts to their actual use, by British units, on D-Day and during Operation Varsity, the Rhine crossing. Includes 100 black-and-white illustrations. $33.00 USD

How the RAF and U.S.A.AF Beat the Luftwaffe. Examines the main campaigns in which the RAF – and later the Allies – faced the Luftwaffe and argues that by the latter part of 1942, the Luftwaffe was no longer a decisive strategic or even tactical weapon. While remarkably resilient, the Luftwaffe was on a continual slide to ultimate destruction. Examines its demise by way of defective strategic planning from its inception, failure to provide decisive results over Britain in 1940, and over the Mediterranean and Desert in 1941-1942, and its failure to defend the Reich and the occupied countries against the Allied bomber offensive. Details numerous aspects to these failures, including equipment (aircraft and weapons), tactics, leadership (political and military), logistics, morale, and more. $35.00 USD

Japanese Tanks and Armored Warfare: A Military and Political History. Re-examination of Japanese tank design and doctrine to refute the popular image of WWII Japanese tanks being poorly armed and armored Lilliputian tin cans which failed to make any impression upon the battlefield. Discusses why Japan produced tanks in such limited numbers, and how armored forces contributed to the war effort, long delays in developing heavier tanks capable of meeting the Allies on more equal terms. Appraises the successes and failures of the Japanese tank forces. $30.00 USD

The Reaper’s Harvesting Summer: The 12-SS Panzer Division Hitlerjugend in Normandy: June-September 1944. Established in 1943, the 12th SS Panzer Division was designed to become an elite unit, consisting of 17 year-old youths commanded by a nucleus of hardened SS officers and NCOs. This is a detailed divisional history from its formation through the Normandy campaign, where it received its baptism of fire. They fought with tenacity and ferocity, defending from Caen to Falaise and taking a heavy toll on Canadian and British forces. $50.00 USD

A Forgotten Campaign: The British Armed Forces in France 1940 – From Dunkirk to the Armistice. Conducted between 27 May and 4 June 1940, Operation Dynamo was the evacuation from Dunkirk of most of the British Expeditionary Force cut off and surrounded during Fall Gelb – phase one of Germany’s invasion of France. Despite the impression that British forces there until D-Day, this was not the case. After the British evacuation at Dunkirk from May p27 to June 4, 1940, the popular impression was that the U.K. forces had no further major presence in France until D-Day. Yet from June 5 to 18, several British and Empire infantry and armored formations and an RAF contingent fought on in France. Two further British and Empire divisions were dispatched to be part of a Second BEF, but the blitzkrieg advance of the Germans proved unstoppable. $40.00 USD

Eagles Over Darwin: American Airmen Defending Northern Australia in 1942. In 1942, the air defense of the northern Australian town of Darwin fell to the U.S.. A massive Japanese air attack on 19 February left the town and its air base in ruins. An understrength squadron of U.S.A.AC P-40E Warhawks fought a gallant defense but was all but wiped out. Yet, the U.S. sent aid – the 49th Fighter Group was the first such U.S. group formed after Pearl Harbor to be sent overseas. It was sent to Darwin. Over several months, the 49th FG pilots fought a brave and innovative campaign against a stronger enemy that did much to safeguard Australia in its darkest hour. Today, lonely and long forgotten airfields still bear the name of American pilots who made the ultimate sacrifice. $43.00 USD