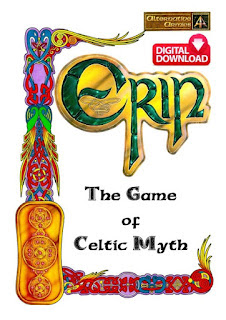 With the classic Erin range fully returned to the website and CM26 Streng hero of the Fir Bolg released we now begin our regular releases into the range which will continue each month.  The first female and first missile weapon armed Fir Bolg to join your warband to battle the evil Fomorians, the magical Sidhe or even the mere mortal Milesians.  Now eighty seven miniatures in the RANGE.

There are now a dozen Fir Bolg miniatures with ten being warriors and one named hero.  We aim to expand the people of the bag to a full faction with a value warband such as that we have for the other races by the spring.

A single Erin metal miniature supplied unpainted, unassembled (if required) and without a base.  See CM26, CM20 and CM21 codes for other Fir Bolg.

We currently have three Warband saver packs which give you a group of miniatures including a hero, champion and warriors for your choice of faction with one miniature free (10% off single prices).

By customer request a paid digital download the 2005 game book for Erin Celtic Mythology.  This book has been out of print for several years and will not return in print as we are working towards a third edition.  This edition is far, far off and thus this title is offered at a much greater reduction as a download to tide you by until then.  See it in the Erin Range or among the array of Digital Download Books on the website.

This has now happened and you can find all of our books on the WEBSITE in one page or their own ranges plus DIGITAL PAID DOWNLOADS of many of these titles on their own page too.

Patrol Angis the core book in its series is back in print and it gives you skirmish rules for The Ion Age.  Get it in print or as a digital title as well as its sequels Callsign Taranis and The Khanate Return HERE on the website.  There is also a game pack which comes with the book plus miniatures and a free extra unique Knight Errant miniature and free bases too.  See the 15mm Ion Age range for all the miniatures and you can play it with the 28mm Ion Age miniatures too.

The classic Laserburn 15mm scale science fiction skirmish rules are back in print.  See them as well as two other titles for the game and the miniatures range on the website.

Escape the Dark Czar the beginners introduction to Flintloque is back in print.  As part of the ten miniature game pack or on its own you get core rules plus characters and scenarios to set you off on Valon in the frozen hell of the retreat from Moskova.  Go to the Begin in Flintloque page for this and free content and suitable miniatures.

The forth game book in the Flintloque series is back in print.  Bier and Bones covers the central Urop theatre of the Mordredian Wars.  The battles between the Ferach Empire and the Ostarian Empire as well as Krautia and the petty stattes of the Confederation of Finklestein.  Get it in print and as a digital download as well as a shilling starter pack with miniatures.  The current Bier Wars project to create the entire army of the Legion de Nain is set in this title.

Now in new molds and a new picture too this classic set. The Five stages of the life of a mage.  28mm Scale Pack or Singles and great for many settings. CA1 at Alternative Armies. See the WEBSITE.

Campfire!  Great for many settings and keeping warm (just kidding).  New pictures and reduced price now in resin. 54502G in 28mm Scale see our TERRAIN RANGE.  The handsome chap in the picture above is a Nosferatu style Vampire from VNT4 The Necratom Risen.

The first of a dozen (one each month all year) Alternia miniatures is free in every package shipped out from Scotland to every customer. You need do nothing but place an order which requires to be shipping anywhere in the world (no Digital Download orders only sorry!) of any size and we will automatically include ALT001 Alternia the Highlander.  As many orders as you want and ends 1st February 2021.  You can also order this code in any amount and you will still get the free one.