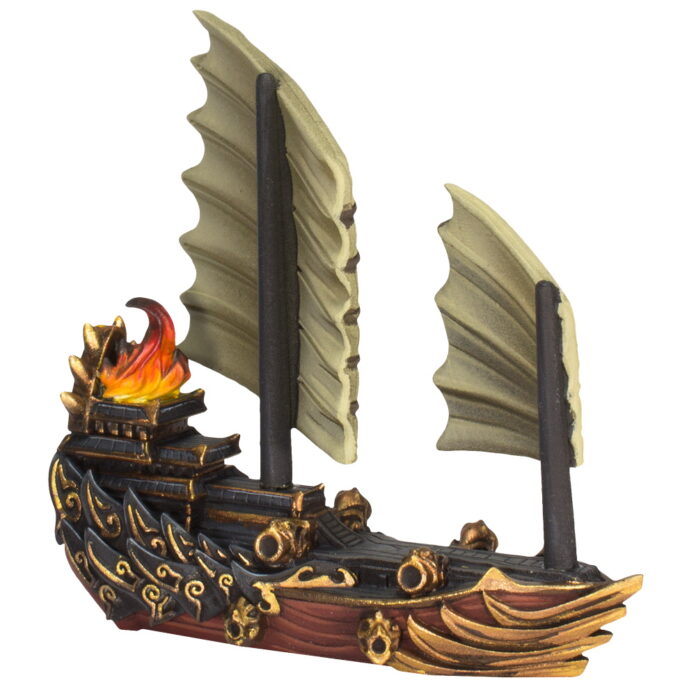 The Salamanders are now available to pre-order from the Mantic website or your local game store. To give you an idea of these skilled sailors play, Armada RC member Jon Gunns is here with an introductory guide. Over to you Jon…

Watch out!  The Salamander fleet is here to wreak havoc on the seas of Pannithor and set the seas aflame. Salamanders are natural sailors with seafaring running in their cold blood. Their ships have been developed through millennia of naval actions and they create a unique and imposing sight that strikes fear into their enemies.

So what is it about the Salamanders that sets them apart from other fleets and how can aspiring admirals get the best from the fleet? Well, to start with, the basic statistics for the fleet are well balanced, meaning that it is possible to optimize ships for either shooting or boarding actions, and build either a balanced fleet or a skewed fleet concentrating on one or other attribute.

Special race upgrades also offer shooting or boarding upgrades to further enhance the ships’ capabilities. For Boarding Actions, Corsairs add one to a ship’s crew strength and also add a plus one modifier to grappling attempts. Firebrand is a particularly effective Captain in boarding actions, offering the Swivel Guns, Grappling Hooks and Corsairs upgrades for free and, as a bonus, not counting against the number of upgrades that can be taken.

Upgrades to shooting are also very effective. Cunning positioning of your ships and use of the Clan Ensign allow ships to add a plus one to hit modifier for one turn, which can offer a devastating barrage.

However, the key attribute that the Salamanders have is their affinity to fire.  The Red Hot Shot special rule can result in any critical hit setting an enemy ship ablaze by rolling a 5+ on a D6.  This is a huge benefit as even Light Weapons are capable of causing a critical hit.  Adding Captain Arhkblash Deelezo to a ship can be even more devastating.  He allows the Red Hot Shot upgrade to be taken for free and has the additional benefit that when an enemy ship is set on fire, a second Blaze marker is placed, forcing any successful roll to extinguish the flames to be re-rolled.  Defensively, the Master of Flames special rule affects all ships in the Salamander fleet and allows any failed Skill test made to extinguish a fire and remove a Blaze marker to be re-rolled.

While several of the fleet upgrades may only be taken by Main Battle Ships, Support Ships should not be ignored and have useful benefits.  The Herald’s Elemental Roar allows ships within six inches to increase their M value by one for that activation, while Warden Squadrons can cancel the effect of Critical Hits on nearby ships.  The Salamander fleet will work best when the synergies between the various ships and special rules are exploited to best effect.

Salamander Fliers are equally competent. The Phoenix regenerates a wound at the end of each turn and can set an enemy ship ablaze, while the Scorchwing Flight has enhanced survivability through reducing the enemy’s chance of retaliating against it.

So, how can Salamander admirals build competitive fleets?  Here is a suggestion for the basis of a ‘balanced’ fleet with both shooting and boarding attributes.

In the early stage of a battle, keep the bulk of the fleet fairly close together. When the enemy approaches within range, ensure that the Clam Ensign is positioned to best effect and then use the Ocarina of Korgaan to choose the wind and ensure that the Elemental Roar on the Herald can benefit most of the fleet.

Use the enhanced speed of your ships to catch the enemy by surprise and get within shooting distance to maximise the chances of setting the foe on fire with Red Hot Shots. Ensure that the Warden Squadrons are close to your key ships to reduce the chance of Critical Hits. With many enemy ships now damaged, Firebrand can close in for the kill in a decisive Boarding Action.

Easy! Well, not really, as the enemy will have something to say about the battle. But, practise in maximising the synergies of the fleet will pay dividends on the high seas.

THE SALAMANDER FLEET WILL BE SHIPPING FROM FEBRUARY 21st. YOU CAN ORDER NOW FROM THE MANTIC SITE OR FROM YOUR LOCAL GAME STORE.