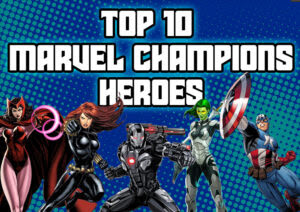 The Marvel Champions card game is easily one of my top ten favorite tabletop games. This game probably gets more time on my table than any other title in my collection. And with new content being released almost monthly, there is no shortage of heroes for you to take control of. Which is why I thought it would be fun to do a list of my Top 10 Marvel Champions Heroes.

Now, any list like this, especially with it being a cooperative game, is going to be highly subjective. If you poll 100 Marvel Champions players, you’d be lucky to find two people who have the same top 10 lists. But regardless, I’m going to give it a go anyway. Note that I’m basing this list on both how powerful the hero is in the game and also how much fun it is to play. This is not strictly a tier rating list. And with the rate of new heroes being released, I’m guessing this will be subject to change in the near future as well. But that’s enough preamble. Let’s get to the good stuff.