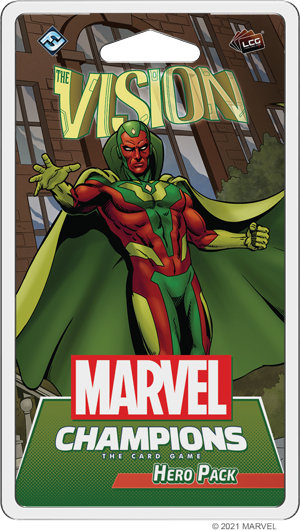 “Odd that some say I am less than human, when in truth I am far superior.” – Vision

Originally created by Ultron to destroy the Avengers, the android known as Vision joined the ranks of Earth’s mightiest heroes instead. Now he uses his incredible powers to protect the planet from danger as The Vision.

This incredible android Avenger phases into battle in this expansion pack, which introduces Vision as a new playable hero along with his sixteen signature cards. With a pre-built Protection deck ready to play from the get-go, you’ll be ready to face your enemies with Vision’s unique density-manipulating gameplay from the moment you open the box. With high durability and a plethora of abilities to punish villains, Vision is an adaptable hero that can be an asset to any team!

Tyranids, Necrons, and Grey Knights Launch Their Own Boarding Actions With New Boxes

Tyranids, Necrons, and Grey Knights Launch Their Own Boarding Actions With New Boxes