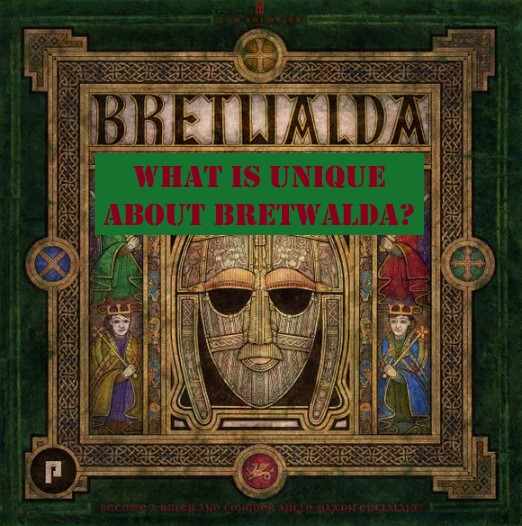 Grant from the Players Aid talks about what’s unique about Bretwalda?

“There are lots of different games in the Lite Civ Building “Dudes on a Map” Area Control genre. It is very popular and has provided many great games including titles such as Dark Ages: Holy Roman Empire and Dark Ages: Heritage of Charlemagne from Board & Dice, Kemet from Matagot, Clash of Cultures from WizKids, Twilight Imperium and Civilization: A New Dawn from Fantasy Flight Games, and Ancient Civilizations of the Inner Sea from GMT Games to name just a few. These games all focus around the same principle of building up an economy, developing technology, maintaining a standing army to defend your kingdom and then milling victory points in a variety of ways from building, technology development, meeting hidden objectives, controlling key cities or areas and winning battles. Most of these Lite Civ Building games can be won though without ever fighting a battle or even threatening any other civilization. Players can simply turtle in a corner, do what they do and end up winning the game without ever having interacted with any other civilization. I don’t like that element about these games. In fact, it really turns me off!

But, there is good news as there is a new upcoming game in this genre that has some rather unique elements and attempts to do what Civ Builders do but do it in a novel and different way…and also finds a way to incentivize combat, which was really a breath of fresh air for me. Bretwalda from PHALANX is a game for 1-4 players that plays in around 2 1/2 hours. Each player takes charge of one of the kingdoms of medieval England, including Northumbria, Mercia, Wessex and East Anglea, and each of these kingdoms has unique leaders and abilities. The goal is to be crowned the Bretwalda of England and victory will be achieved through a combination of controlling key areas with victory points, completing Chronicle cards in the form of hidden objectives and also focusing on building various buildings such as Abbeys.

In this piece, I would like to discuss how Bretwalda does things that are expected in a Lite Civ Building Dudes on a Map Area Control game but how they do them differently.“