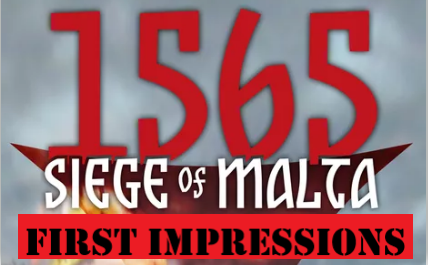 From the Players Aid

“I really love a tough, hard to win solitaire game. There is something about putting a plan together and trying to make it happen that really connects with me, even in the face of great odds and longshots. Don’t get me wrong, I am not a masochist and do like to actually win games from time to time but there is something about the struggle and the pain you feel as you see your plans fail time and time again that makes the first victory feel so rewarding! Recently, Worthington Publishing has published several of these type of tough solitaire games. Late last year, I played and did terribly at Tarawa 1943 as it was simply brutal. I played about 10 times and only won once but after looking back I think that I did some things incorrectly that made my victory possible. Ooops! Now, they have come out with 2 new Great Sieges Series games focused in antiquity that are both brutal as well.

The first of these games that I decided to play was 1565 Siege of Malta designed by the very talented Maurice Suckling of Freeman’s Farm 1777 and Chancellorsville 1863 fame. The game deals with The Great Siege, as it’s also known in history, where the Ottoman Turk’s westward expansion broke against the wall of Christian defense on the small but strategically significant archipelago of Malta in the Western Mediterranean. The Ottoman Turk invasion force was huge as the armada delivering the troops was almost three times the size of the vaunted Spanish Armada defeated by the English (and the weather) in 1588. It was supported by around 40,000 troops. Malta was defended by around 500 Knights of St. John and 5-6,000 other soldiers, including civilians. The Turks failed to capture all of the important fortresses in the area, among them Fort St. Elmo, Fort St. Angelo and Fort St. Michael. Had they captured all of them, the most likely outcome would have been sustained Turk expansion into Europe, including into Sicily, Italy, Spain and perhaps even France. This siege historically is a very important and pivotal moment in the future of Europe.”