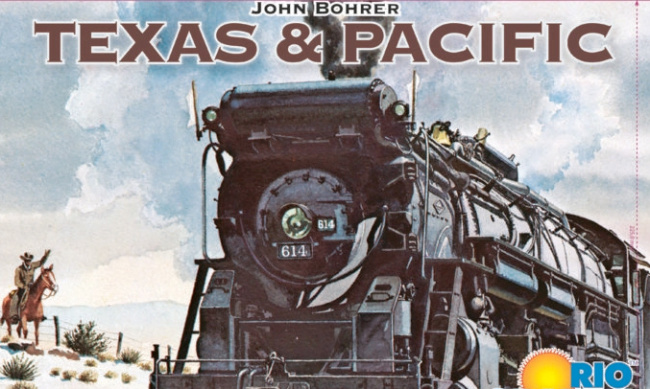 A railroad-building game from Rio Grande Games is in the works:  Texas & Pacific, designed by John Bohrer (Chicago Express, Ride the Rails), will release soon.

Set in the American Midwest and Texas during the 19th Century, Texas & Pacific puts players in the role of wealthy ranchers and investors who are looking to the new railroads that will enable them to deliver their stock of cattle to lucrative markets in the North.  They will buy stock in a variety of companies, then operate those companies to expand their network of rail lines and improve the value of their holdings, while timing the payment of dividends to maximize their own personal profits.  In the end, the wealthiest player will be declared the winner.

Texas & Pacific is intended for 2 to 6 players and can be played in a bit less than an hour.  MSRP has not been announced as of this writing.  This is an updated version of the game released by Winsome Games in 2010 and features artwork by Todd Sanders (Gulf, Mobile & Ohio, Trans-Siberian Railroad).