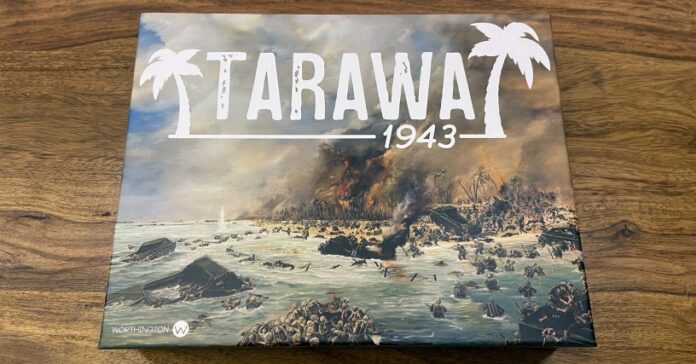 The Battle of Tarawa – an amphibious landing operation in the Pacific Theater of World War II – was fought on 20–23 November 1943. It took place at the Tarawa Atoll in the Gilbert Islands. Nearly 6,400 Japanese, Koreans, and Americans died in the fighting, mostly on and around the small island of Betio, in the extreme southwest of Tarawa Atoll.

This engagement was the first, true American offensive in the critical central Pacific region. It was also the first time in the Pacific War that the United States had faced serious Japanese opposition to an amphibious landing. Previous attacks met little or no resistance, but on Tarawa the 4,500 Japanese defenders were well-supplied and well-prepared, and they fought almost to the last man, exacting a heavy toll on the United States Marine Corps.

Tarawa 1943 is a solo, card driven wargame on exactly that invasion in November 1943. Each turn the USMC player will activate one of his 8 battalions and can move, attack or regroup. The action can be augmented by the play of the Card. After that, the bot (Imperial Japanese Army) will draw its card and conduct the turn.