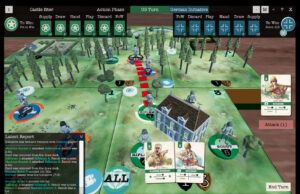 Today, game developer Bookmark Games (Pavlov’s House) announced the upcoming release of a digital version of Undaunted: Normandy. Published by Osprey Games, Undaunted Normandy is a combination deck-building game and skirmish game set during World War 2. The game has won more than a few awards and has even gone on to spawn a number of expansions, both a traditional one and a standalone in the form of Undaunted: Africa. In fact, a second stand-alone expansion is due out this fall called Undaunted: Stalingrad.

However, for players looking to get in a game of Undaunted by themselves, right now the only option is to pick up the Undaunted: Reinforcements expansion. It has a solo mode using a card and AI system. Yet that’s about to change as Bookmark Games is set to release a digital version of Undaunted Normandy for PC, Mac, and iOS